The Oconee Leader, which ceased publication on May 15, is relaunching, with the first edition to be delivered to driveways and distribution stands around the county on Thursday.

The paper will be owned by the Athens Banner-Herald, according to an Aug. 2 post on Facebook by former Leader owner Rob Peecher.

Peecher said he will work with the new paper in an unspecified leadership position.

David Schleter, multi media sales executive with the Athens paper, has sent prospective advertisers an email message promising that “8,800 copies will be pitched onto driveways” and additional copies will be “in distribution stands around the area every Thursday.”

Schleter said in the email message that the re-launched Leader will have a larger format.

The old Leader was a small tabloid. 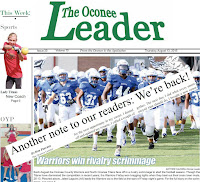 The Athens paper, in contrast, is a broadsheet, as is The Oconee Enterprise, the paid circulation weekly against which the new paper will compete.

Schleter attached a PDF of the front page of the Thursday edition, which I used to create the picture on the right. (Click on the picture to enlarge it.)

Peecher, in his Facebook post, said he had sold the Leader to the “Athens Banner-Herald, and that the ABH has contracted with me to work for the OL again.”

“I'm coming out of retirement and putting the band back together,” Peecher continued. “Mary Anne Carroll Gordon, Mike Sprayberry and Matthew Caldwell are also reprising their roles.”

Peecher said his wife, Jean, who did design and graphics for the Leader, would not be rejoining the paper. He said the agreement with the Banner-Herald “allows me some time to pursue other opportunities.”

“I am officially out of retirement and back on the clock,” he wrote.

Peecher announced the closing of his paper in a front-page story at the top of the May 15 edition, the last for the paper.

Peecher cited continued financial problems going back several years as the reason for the decision to close the paper.

Peecher started the paper in 2006 as a free, total market circulation product with an announced circulation of 12,500. He began selling subscriptions only a little more than a year before he closed the paper.

In his statement, Peecher said the move to paid circulation was only “moderately effective.”

Schleter said the relaunched paper will “remain a FREE publication.”

Peecher didn’t mention it at the time, but he also was about to lose his office space when he closed the paper.

The Leader had its offices at 46 Greensboro Highway in Watkinsville, and that building was purchased from Shore Holdings LLC by Pawliday Inn Holdings LLC on May 28 of this year, according to county tax records.

The building housing the paper and the one next door at 48 Greensboro Highway are being renovated for a pet boarding facility.

Pawliday Inn Holdings has it address at 1590 Whippoorwill Road outside Watkinsville. Patrick Lang is the registered agent.

Still would like to know why. They could have hired an Oconee beat reporter for the Athens Banner Herald.

This does seem crazy. The Athens BH cannot even publish a decent newspaper anymore, even though it is relatively expensive. So, now they'll own 2 poor excuses for newspapers. May Flagpole (a good free newspaper) and the Oconee Enterprise continue.

Other interesting figures would be to learn ABH's current print and online subscriber numbers total and broken down for each Athens-Clarke, Oconee, Oglethorpe, Jackson, Madison and Barrow counties. They may be required to publish distribution numbers annually. Recollection is that late 90's the total figure was around 45,000, but by mid 2000's had dropped to around 17,000. Only total figures found recently for ABH are from Echo Media showing approximately 15,000 on Sunday and 13,000 weekdays of which most are likely in Athens-Clarke.
It could logically be assumed that with the purchase of a failed publication they are grasping for advertising dollars through Oconee's wealthy audience. What an odd Morris management decision when it was proven after 7 of O Leader's 9 years that very few in Oconee actually would pay to receive it, in essence it went to recycle. People tend to keep what they pay for and throw away trash.

What if I don't want or need the paper? I really don't like people littering my driveway...