Even though the Oconee County Calls Creek wastewater plant stopped producing solids at least a year ago, the county continued to pay a company for hauling those solids to a landfill through at least the end of April of this year, according to financial records of the county’s Utility Department.

Solids, also referred to as sludge, are removed from the raw sewage in a wastewater plant as part of the treatment process and then disposed of, generally at a landfill.

Oconee County stopped hauling solids to the landfill from its Calls Creek wastewater treatment plant in late 2013, an examination of invoices and waste manifests from the Utility Department indicates.

Yet on April 30, according to the ledger of the Utility Department, the county paid $571.29 to Roll Off Systems, 1100 B. Garrett Drive, on the far western end of the county, for “sludge disposal.”

Because of the separation of the financial records of the Utility Department from those for the rest of the county, administrators seem to have missed this key indicator of problems at the Calls Creek plant.

Troubles at the Calls Creek plant have been known to County Administrative Officer Jeff Benko since at least September of 2013 and to Oconee County Board of Commissioners Chairman Melvin Davis since at least January of this year.

Benko asked Utility Department Director Chris Thomas about the buildup of solids at the Calls Creek plant at some time in the spring of this year, and Thomas assured him in an email message on April 22 that there were no problems with solids at the plant.

Five days later—on April 27--Oconee County Board of Education member Mark Thomas, who owns property downstream from the Calls Creek plant, showed Davis pictures and video of seemingly untreated outflow from the plant into Calls Creek, a tributary to the Middle Oconee River.

That revelation by Mark Thomas—no relation to Chris Thomas—forced a public acknowledgment by Chairman Davis of the issue on May 26.

Following the revelations by Mark Thomas, the county retained Bob Sheldon of Dacula as a consultant and asked him to examine operation of the Calls Creek plant as well as of the county’s only other sewage treatment facility—the Land Application System on Rocky Branch Road.

On May 17, Sheldon reported regarding the Calls Creek plant that “Solids have not been dewatered and removed from the facility for over a year.” The LAS site also had a problem with solid buildup, he said.

That document showed the county disposing of “municipal bio-solid sludge” at the Oak Grove Landfill in Winder on that date. A separate invoice shows Oak Grove receiving 13.21 tons of “sludge” from a water treatment plant on that date from customer Roll Off Systems.

The Utility Department records, which I obtained through an open records request, show 14 invoices from Oak Grove Landfill to Roll Off for “MSW” from Nov. 2, 2013, to April 30, 2015. MSW seems to be shorthand for municipal solid waste.

I specifically asked for records of payments to Roll Office for disposal of solid waste from the Calls Creek plant from Jan. 1, 2013, to June 8, 2015, the date I filed the request,

I also asked for manifests.

The county’s permit to operate the Calls Creek plant, issued by the Georgia Environmental Protection Division on July 15, 2014, specifically requires monthly documentation of sludge removal and requires disposal of that solid waste in a “permitted sanitary landfill.”

The Calls Creek plant uses a mechanical device called a belt press to squeeze via a series of rollers the sewer slurry or sludge that settles in the main treatment tanks. A polymer, or large molecule, is added to aid in the solidification process.

The county has no manifests for receipt of solid waste at a landfill after Nov. 1, 2013.

At least during part of that time, according to consultant Sheldon, solids were not being dewatered and removed from the plant.

In fact, according to Sheldon, “The belt press has not been operating for at least a year.”

The financial records for the Utility Department also show a payment on May 27, 2015, of $1,305 to CedarChem LLC of Cedartown, west of Atlanta near the Alabama border, for its registered polymer, CedarFLOC.

Prior to filing my open records request for the Utility Department financial records, I filed a request with the county Finance Department for records of payments to Roll Off Systems or any other hauler for disposal of solids from the county’s two wastewater facilities and for manifests showing where the solids had been hauled.

Oconee County Clerk Jane Greathouse, who is the open records officer for the county, relayed to me the message from Finance Director Wes Geddings that the Finance Department records do not contain detailed expenditures for the Utility Department.

The Utility Department operates as what the county calls an “Enterprise Fund,” meaning it generates its own revenue via the fees it charges for water and sewer services.

When I received the Finance Department records, I could see many quite specific references, such as for payments of the services of County Attorney Daniel Haygood and for payments to The Oconee Enterprise, which is the legal organ of the county.

But I could find no records for payments to Roll Off Systems or to CedarChem for polymers.

The financial records I received from the Utility Department in response to my request were disorganized.

Hand-written notes appear with the Barrow County reference on some of the more recent documents.

The invoice for Feb. 5 of this year, for example, has “Calls Creek Watkinsville” hand-written below the typed “Barrow County.”

The copies I received also were very light, making it difficult to read some of the entries, and out of order.

I filed an open records request with Barrow County Clerk Danielle Austin late on the evening of June 28, a Sunday, for “Manifests from Oak Grove Landfill or any other landfill for receipt of solids from the county's wastewater treatment facilities from Jan. 1, 2015, to April 30, 2015.”

I received scanned, easily readable photocopies of those manifests via email at 3:47 p.m. the next day.

None of those manifests matched the invoices in the Oconee County Utility Department files I received.

The Barrow Country manifests list the Barber Creek wastewater facility in Statham as the generator, Roll Off Systems as the transporter, and Oak Grove landfill as the destination.

I also sought to obtain manifests from the Athens office of the Georgia Environmental Protection Division for the disposal of sludge from the Calls Creek wastewater treatment facility.

Both Steve Walker, EPD environmental compliance specialist with responsibility for the Calls Creek plant, and his supervisor, Mike Rodock, told me that EPD does not have copies of those manifests.

Rodock told me that EPD would ask for the manifests only if it felt there was a problem at a wastewater facility.

EPD had not requested the manifests for the Calls Creek plant, they said.

The invoices I received from Oconee County during the period in which there were no manifests are specific regarding the weight of material hauled.

The last manifest in the file, for Oct. 21, 2013, was signed by Gene Price, Oconee County wasterwater supervisor. Price resigned on May 21 of this year.

One asked for the contract between Roll Off Systems and the county for hauling sludge from the county’s wastewater facilities.

The other asked for records of payments to Oak Grove and any other landfill for solids from the wastewater facilities.

The county told me no such records exist.

I filed an open records request for correspondence between Benko and Chris Thomas from Jan. 1, 2013, to April 30, 2015, regarding the removal of solids from the LAS site on Rocky Branch Road.

In response, the county provided me a copy of an email message from Chris Thomas to Benko on April 22, 2015.

“Per your inquiry, I have checked on sludge disposal at Calls Creek,” Chris Thomas wrote to Benko.

“The EPD receives a report every month that includes solids disposal and have not had an issue with our numbers,” Thomas continued. “Also, rolloff containers are being filled and regularly removed as part of our solids handling program.

“We are even moving our belt press to the LAS next week as soon as they complete the most recent batch of sludge removal at Calls Creek,” the message continued.

“I think everything is ok as far as sludge goes, but I will continue to monitor,” Thomas wrote in conclusion.

Mark Thomas presented Chairman Davis with the photos and videos of dirty discharge from the Calls Creek plant on April 27.

Sheldon’s report, completed on May 17, said that the belt press was not operating, that solids had not been removed from the Calls Creek plant in “over a year,” and that solids were building up in the ponds at the LAS site.

The Board of Commissioners on July 28 approved an agreement with PSC/JESCO Industrial Services of Calvert City, Ky., for $298,500 for removal of sludge from the ponds at the LAS site and for disposal of the sludge to a landfill.

Sheldon told the BOC on June 30 that the county had not removed sludge from that facility since it was opened in 2002.

The timeline below summarizes the developments regarding the problems at the two wastewater treatment plants.

The timeline is broken into blocks.

Click on any one of the images to enlarge it. 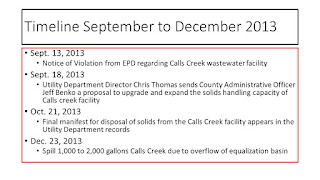 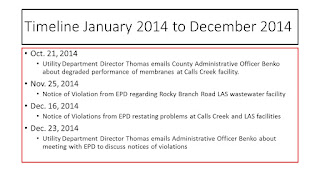 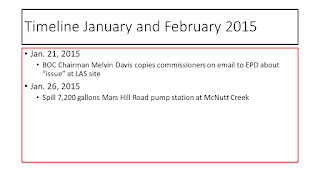 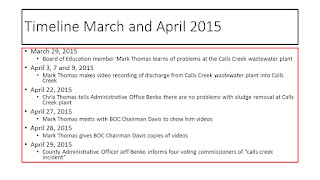 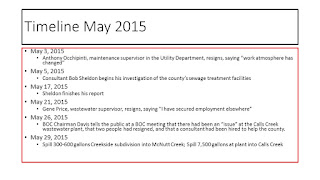 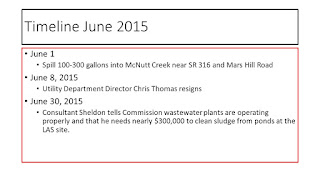 Since the utility department has evidently been in such a mess, should we have any concern about the purity and safety of our drinking water? Once again, thank you for your diligence as a "watchdog" -- who knows what would be going on if "they" knew you weren't watching.

Jeff Benko and Melvin Davis...epic failure...raw sewage in our watershed and they choose to hid info. from the public..cryin' shame