Turnout in Oconee County for the Republican Primary Runoff on Tuesday was only slightly lower than turnout for the May 22 party primary, an analysis of elections data by party shows.

Democratic turnout dropped dramatically, however, and overall turnout was down from 29.8 percent in May to 22.7 percent on Tuesday.

The vast majority of Oconee County Republicans–84.7 percent–voted for Brian Kemp, contributing to his overall state victory with 69.5 percent of the vote. 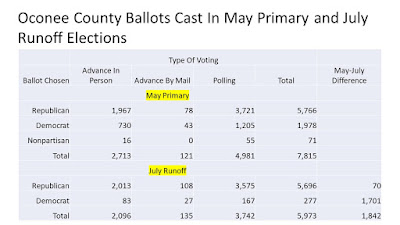 Thirty more Republican mail ballots were cast in the runoff than in the May primary.

On election day itself, however, 146 fewer Republicans cast a ballot in the runoff than had been the case in the May primary.

Voters could decide if they wanted a Republican, Democratic or nonpartisan ballot in May, but, for the runoff, those who had voted for a party in May could not switch parties.

Fran Davis and Jennifer Stone, director and assistant director, respectively, of the Oconee County Office of Elections and Registration, said these choices were checked by the election officials, who had a record of the party chosen in the May primary.

Democratic voting was much lower in the runoff whether Advance In Person, Advance By Mail, or on Election Day (Polling) than it had been for the primary.

I was able to construct the table above with the assistance of Assistant Elections and Registration Director Stone.

I was not able to obtain comparable data for the state.

A total of 588,603 Georgians voted for either Kemp or L.S. “Casey” Cagle in the gubernatorial race on Tuesday. Slightly fewer voted in the race for lieutenant governor or secretary of state.

In May, 619,711 persons voted in the Republican primary for the governor's race.

In May, using the comparable calculation, the turnout rate was 19.3 percent.

It isn’t possible with the data available publicly from the Secretary of State’s Office to determine the number of voters statewide who chose a nonpartisan ballot in May. Counting those votes would increase the turnout rate.