A comparison of the two elections shows that high turnout in Oconee County played a major role in the victories by Gaines and Wiedower.

Wiedower lost in Clarke County but won in Oconee. The two counties share the district.

Cowsert also lost in Clarke County but won in Oconee and Walton counties. All of Oconee County is in the 46th, but only parts of Clarke and Walton are in the district.

Results for these three races were not available on the Georgia Secretary of State Web site until Wednesday morning because of problems in counting the ballots in Clarke County.

I have done additional analyses of the District 117 and District 119 House races since my initial post to examine the role Oconee County played in the outcomes.

Gaines’ percentage of the votes received in each of the four counties that make up the 117 House District did increase from 2017 to 2018, but he did poorly in Clarke County, the largest part of the district, both in 2017 and 2018.

Gaines received 35.9 percent of the vote in Clarke County in the special election and 37.7 percent in the election on Tuesday. 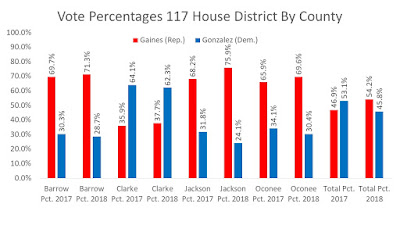 Turnout was much lower in the 2017 special election, but it was nearly the same in the two counties.

In 2017, Clarke County votes made up 49.4 percent of Gaines’ total vote, while on Tuesday it made up only 35.6 percent of his vote, even as his percentage of the vote in Clarke County was up slightly.

In 2017, the percentage of Gaines’ vote that came from Oconee County was 33.7. On Tuesday, Oconee County made up 37.2 percent of his total vote. 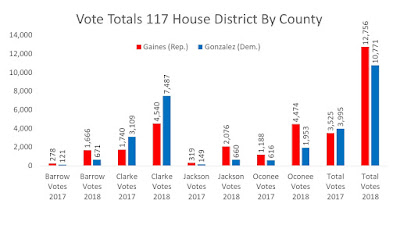 The same picture emerges from a comparison of the special election in the 119th District in 2017 with the election on Tuesday.

In 2017, Wiedower was joined by Tom Lord and Steven Strickland as Republicans in the open election. I have combined their votes in 2017 in the charts below. Wiedower is alone in the 2018 comparisons.

Wallace did less well in both counties as a consequence. 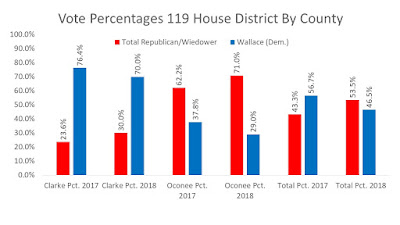 Even with that increase in votes on Tuesday, Clarke County votes made up 24.1 percent of Wiedower’s total vote on Tuesday, while it had made up 26.7 percent a year ago.

Oconee County simply played more of a role in Tuesday’s vote because of the increased turnout. 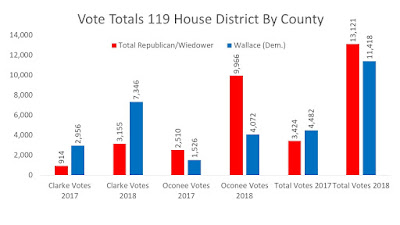 The 119th District is roughly evenly split between Oconee and Clarke counties in terms of number of voters.

Had turnout been the same in the two counties, Wiedower should have won, but only by a very small amount.

Republicans going into the election on Tuesday knew that turnout was going to be important in Oconee County, and it was.

The higher turnout in Oconee County helped make it possible for Gaines and Wiedower to lose by wide margins in Clarke County and still win the elections.

By electing Cowsert, Oconee residents will continue to go unrepresented.

The Republican House Representives raised large sums of money. Now they have to pay back those fat cats. You will get lots a talk by them and no actions.

We will not be represented by Athens-Clarke ( Little Vensuzella ) or bike world.