Woodall went through the list of 18 projects listed as Corridor Capacity Improvements in the county’s Long Range Transportation Plan and asked Task Force members for their comments on the proposals.

Few had any reaction.

In the end, it probably matters little, as Daniell told the group that he felt the Georgia Department of Transportation study had focused too much on capacity improvements and not enough on operational improvements to existing roadways.

Most of the capacity projects call for increasing the number of lanes on county roads, and Daniell said he felt the county would be better off asking the state for help with such things as intersection improvements.

The Task Force will have another chance to comment on the proposed capacity and operational improvements in the transportation study, as well as on bridge needs and bicycle and pedestrian facilities, at its next meeting in January.

In July of 2017, Daniell announced that the county was about to enter into an agreement with the Georgia Department of Transportation for a county-wide transportation study.

GDOT then entered into a $215,082 consultant contract with HNTB Corporation of Atlanta to provide a multi-modal transportation study for Oconee County.

HNTB was to document and evaluate the exiting transportation system of the county and recommend needed improvements.

The final report, dated March of 2019, is available on the county web site. The document projects needs for the entire county through 2045.

At the Board of Commissioners meeting on June 25, Daniell, noting that six members of the county’s Land Use and Transportation Planning Committee had terms expiring on Sept. 30, recommended that no applications be accepted for the expiring terms.

Instead of appointing members to the existing committee, Daniell said, the remaining six members on the Committee should become a Task Force and be asked to review the county’s transportation study.

After completion of that assignment, Daniell said, the Task Force would be dissolved until another is needed.

The Board approved the dissolution of the Land Use and Transportation Planning Committee at its meeting on July 2.

The continuing members who attended the meeting on Nov. 12 at the Community Center in Oconee Veterans Park were: Rolland Ebright Jr., Rick Garrett, Bryon McCarley, Kirk McClellan and Kirk Shook.

Woodall began his review of the report by advising the Task Force members of the difference between capacity projects and operational improvement projects.

“The operational improvements,” Woodall said. “They address geometric concerns and other issues that impact the flow of traffic on the existing roadway facilities.

“They may include the addition of turn lanes and passing lanes to improve free movements,” Woodall said, reading from the report. “Shoulder widening or upgrades, introduction of traffic calming elements, improved curb or training radii and/or paving projects.”

“In a nutshell,” Woodall summarized, “that’s taking the existing facility and doing some minor improvements.” 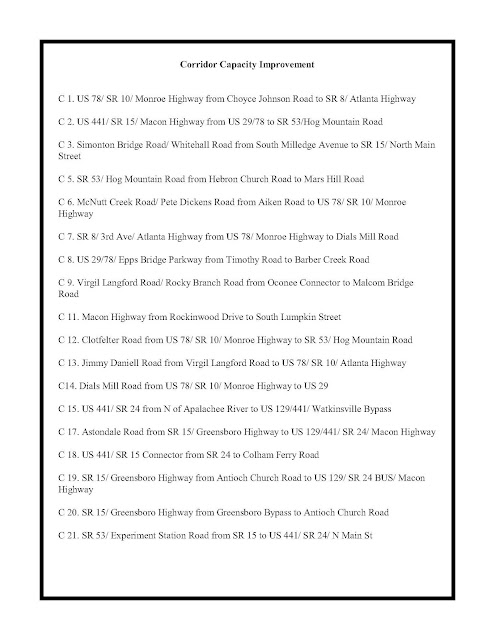 Woodall said the county already has approval from GDOT for money for the 2021 Fiscal Year “to do a shoulder widening” of Simonton Bridge Road.

The plan also calls for the widening of Epps Bridge Parkway and SR 316 to six lanes from Timothy Road in Clarke County to Barber Creek Road in Barrow County.

“I know the section the county maintains from the river up to the 10 loop would be very challenging from a right of way standpoint,” Woodall said, referring to McNutt Creek as a river. “That corridor is very developed commercially.”

Confusion On One Project

Woodall said he didn’t understand one of the projects involving Colham Ferry Road in Watkinsville, labeled C-18 on the project list.

“That project, I don’t know what it’s trying to solve,” he said.

Projects C-19 and C-20 call for the widening of SR 15 from Watkinsville to the county line.

“I don’t know that four-lane widening is the most beneficial treatment,” Woodall said.

“On all of these, what I would task this group with,” Woodall said, “is looking at all of the projects and seeing what merit they have and what benefit they have for the community and the county.”

At end of Woodall’s reading the list, both he and Daniell asked for feedback, but they got little response.

McCarley agreed with Woodall that SR 15 should not be widened to four lane, saying that the passing lanes now being planned should be sufficient.

Garrett asked what the state plans were for the SR 316 flyovers and said all of the projects needed to be coordinated.

Shook asked about the flyover of the Oconee Connector to Daniells Bridge Road, which isn’t on the list.

Discussion turned to other topics, such as the recommendation in the bridge section of the transportation plan that the historic Elder Mill Bridge be upgraded.

Woodall said the bridge would have to be bypassed, rather than upgraded.

Woodall said he would like the Task Force to create “a road map of projects that as funding becomes available that the county would start looking at.”

“This stuff on capacity, where you’re going to four lane roads, is there something we’re not seeing a need for at this point?” Daniell asked.

“It appears this study was heavily weighted toward future growth,” Daniell continued. “A lot of these projects–the price tag is so huge that it’s going to take a state effort.

“That is kind of the question,” Daniell continued. “Widening to four lanes, what are we really getting there? I’d like to hear from you if you disagree.”

“I’m kind of looking at it, let’s go for the operational improvements at intersections where we’re having trouble,” Daniell continued. “Clotfelter, Snows Mill at 53. Rays Church.”

Daniell said his proposal is for the county to put up some money into the projects and then turn to the Georgia Department of Transportation.

“Hopefully they can release the big money,” he said. “That is how we’re working it right now. If we get the right of way, if we do the engineering, can you all come with the construction?”

The video below is of the entire meeting of the Transportation Task Force.

Woodall’s review of the 18 capacity projects takes place during the first 20 minutes of the meeting.

Daniell made his comments about his preference for focusing on the operational improvements at 22:10.

Does John Daniels even have a vision for the County? Capacity Improvements are long-term investments in infrastructure. They are more expensive because they have greater impact. They help promote more industry and more business. That's how you grow a county. Operational Improvements are short-term focused.
We paid for an experts opinion and he thinks his opinion is more valid than the Engineers? What makes him qualified? John Daniels is sacrificing our long term potential, as per usual.

Has Big John seen the traffic on Greensboro Road and Hog Mountain Road at 5 to 8 pm or am? Ten years ago we only needed 2 lanes on Mars Hill and no Oconee Connector.

Not to mention the idiotic change they made for building houses on septic. They increased the lot size to 1.5 acres. I hope anybody else that wants to come can afford to pay upwards of 750k for a home. They have put builders, well certain builders, out of business. But, hey - we have a roundabout on Mars Hill now...


Daniell is violating the ethics ordinance governing the commissioners by taking over a citizens’ advisory board. The board (all members) should have been given the info with instructions and let them complete it. This type of information should have been made available to the public and committee month ago. Daniell stated he had nothing for the board, therefore he was giving a single task and shutting it down. Now he has a completely different task and he directs the discussion. Woodall appears out of loop as far as understanding any projects proposed or in John Daniell's’ mind.

Technical support or professional direction has been diluted to meet John Daniell’s capability. His ego will cost us in future planning and our pocketbooks.

Who wants more more houses on small lots? Who wants more 4 lane county roads? Who wants faster roads with more volume especially with some of the intersections problems we have?I will take safety over volume any day. Save the poor builder talk as well. Sounds like they are finally listening to citizens to slow this mess down. Builders can go to Clayton and Rockdale County.

Oconee county is failing to meet the needs of its citizens by providing basic services and infrastructure. Could a young couple consisting of a schoolteacher and policeman afford to buy a house and raise a family here? Is it neighboring counties responsibility to provide housing and services for average wage earners?