Oconee County Schools and the Board of Education have shifted their attention from spending money from the current Education Local Option Sales Tax to making sure that the revenue the tax produces in its remaining months will be sufficient to pay back the bonds sold against that revenue.

At the regular meeting of the Board of Education on Monday, Saranna Charping, chief financial officer for Oconee County Schools, told the Board that spending on the budgeted projects for the current Education Local Option Sales Tax, or ELOST V, is nearly complete.

Board Member Tim Burgess asked Charping if she was confident that the revenue was sufficient to pay the bonds and produce a surplus, and Charping said she was, but her answer was a cautious one.

An analysis of the documents released by Charping and data from the Georgia Department of Revenue indicates that the school system should be able to make its bond payments easily, even with the declines in revenue experienced in recent months, and have funds remaining.

Charping gives detailed monthly reports to the Board of Education at its regular meetings on overall spending, on spending on ELOST projects, and on ELOST receipts.

She told the Board on Monday that the school system had spent $38,554,094 as of the end of October for projects budgeted to come from ELOST V revenues.

Burgess has been encouraging Charping to give updated figures on ELOST spending, and she reported that only the $527,718 in unspent money for technology and buses remains.

Revenues are transferred a month following collection, so the receipt of the January 2018 revenue was in February of that year.

Burgess is the only Board member who regularly raises questions about Charping’s reports, and he was true to form on Monday.

“It still looks like to me that by the end of the calendar year we will have collected enough to easily set aside the full 2020 debt service payment of a little over $6 million and still have roughly $2 million as a head start against debt service payments for 2021 or other project expenditures that we may have,” Burgess said.

“Does that sound even close to likely from your perspective?” he asked Charping.

“I’ll have to get back to you on that one,” she replied.

“When you look at it over a longer period of time,” Burgess said, “and do any kind of reasonably conservative projections out, we’re still in really good shape with our ELOST collections meeting our debt service payments and still having dollars available for other expenditures that we may have.”

“That’s a very comfortable position to be in,” Burgess said. “I just want to make sure that my comfort is well founded.”

The Georgia Department of Revenue makes the distributions of sales tax revenues around the state available on its web site.

I downloaded those data to be able to easily plot out the trends and make projections for the remaining months of the five-year ELOST collections.

The Georgia Department of Revenue makes pro rata (proportional) distributions of sale tax revenue that it labels “unprocessable” to jurisdictions collecting the education sales tax twice a year, with the June and December distributions.

Charping’s report lumps those pro rata monies with the other June and December normal distributions. In the chart below, those are labeled as May and November collections.

Whoever took those data from the state report used the data in the column marked “Returns” rather than “Amount,” as is correct and had been done for all other months.

I used the Department of Revenue data, not those used by Charping, in my analysis and in the chart.

The data in the chart below show the actual ELOST collections going back to January of 2018 when the current tax took effect. 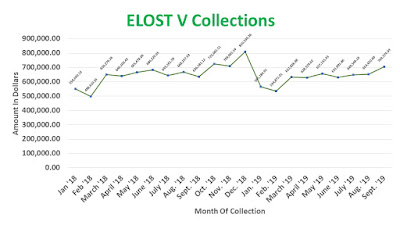 As is clear, collections have been lower in 2019 than they were in 2018, as Charping has reported to the Board at recent meetings and as she acknowledged on Monday.

The September collection showed an improvement over the previous month and was up from September of 2018, offering some suggestion the collections may be improving.

The Georgia Department of Revenue cautions, however, that a collection for a month may actually include more than 30 days in some circumstances, so month-to-month fluctuations may not be significant.

During the last nine months, the collection has averaged $628,556 per month.

According to Charping’s report, the school system will need $18,435,710 to pay off the bond and cover the additional budgeted amount for the technology project and the buses on order.

That would suggest a surplus of about $6.7 million.

The cap means Oconee County School is not allowed to collect more than $45 million and would have to end the tax when that amount is reached.

Burgess projected that the system, by the end of the year, would have “roughly $2 million as a head start” for the 2021 payment.

During its recognitions section of the meeting on Monday, the Board posthumously honored Frances Martenson, former Oconee County Middle School teacher, as the 2019 OCS Hall of Fame inductee.

The Board also voted unanimously to approve the Local Facility Plan, which outlines future capital projects for the system, including a new middle school.

The video below is of the Nov. 11 meeting of the Board of Eduction.

Charping gave her report at 20:45 in the video.

An extremely interesting first sentence that hits the nail on its head.
First it's the spending, and as long as the money lasts.
If there's not enough, suddenly the attention shifts to getting More.
Heaven forbid that taxes remain reasonable THEN spend available.
Nope. More, more, more.