The Georgia Department of Transportation is scheduled to make 10 intersection improvements on SR 316 in Oconee County over the next eight years, with right of way acquisition for the first of these–at the Oconee Connector–planned for 2020.

Actual construction of the interchange at the Oconee Connector could begin as early as 2022, according to state planning documents.

Improvements to SR 316 were a central topic of discussion of the county’s Transportation Task Force when it met last month, and Oconee County Public Works Director Jody Woodall sent out an email message to Task Force members after the meeting providing a time line for the projects.

Regional transportation planning documents list an additional intersection improvement–at SR 316 and SR Loop 10–as well as construction of frontage roads along the northside of SR 316 from Dials Mill Road to Mars Hill Road and then from Mars Hill Road to Jimmy Daniell Road.

Additional Georgia Department of Transportation planning documents outline the urgent need for a multi-grade intersection at the Oconee Connector and SR 316 and propose a complex detour route while the construction is underway.

Construction dates vary for projects in the Georgia Department of Transportation (GDOT) documents and in document from MACORTS–the Madison Athens Clarke Oconee Regional Transportation Study. MACORTS is the name of the metropolitan planning authority for the region. 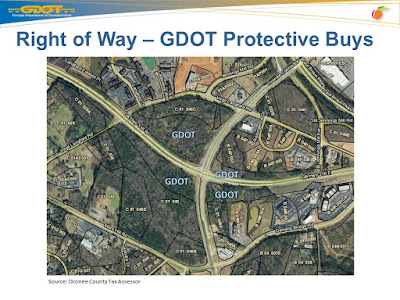 Construction of the multi-grade intersection at the Oconee Connector and SR 316 is listed as 2025 in the GDOT document Woodall used in creating the time line for the county’s Transportation Task Force.

Another GDOT document uses the 2023 date, however, and MACORTS documents use both 2023 and 2025. References are to Fiscal Year, not calendar year.

Members of the Task Force, meeting in November to discuss a transportation study GDOT did for Oconee County, raised questions about improvements to SR 316, and particularly about the timing of the interchange improvements at the Oconee Connector.

Woodall sent out his email on Nov. 26, or two weeks after the Task Force meeting.

Woodall provided the Task Force members with the GDOT project numbers and provided a project description and “programmed years for funding for these projects.”

The Dails Mill Extension is the western most of the intersections, and the Oconee Connector is the eastern most.

Woodall said, “Based on the programmed construction costs, I made the assumption” that all of these would be grade-separated interchanges except Dials Mill Road and Jimmy Daniell Road.

(Woodall listed the Connector interchange as an at-level intersection, but I know from other correspondence with him that he expects that exchange to be multi-grade, and other GDOT documents confirm that.)

The MACORTS 2045 Metropolitan Transportation Plan, approved on Oct. 9 of 2019, includes the nine interchanges listed by Woodall as well as improvements to the intersection of SR Loop 10 and SR 316.

The 10 interchange improvements, according to the MACORTS document, will be funded by the state with revenue from House Bill 170, which the Georgia legislature approved in 2015 and provided additional funding for state transportation projects resulting from on an increase in the state fuel tax.

The frontage road projects are listed in the MACORTS 2045 Metropolitan Transportation Plan as “unfunded” at present, meaning the source of money for the projects has not been identified.

The MACORTS Transportation Improvement Program, dated Aug. 9, 2017, lists the Oconee Connector interchange with SR 316 as the top Tier 1 project for 2018-2021.

The second project on the priority list is the Dials Mill Extension interchange, with project engineering scheduled for 2020, right of way is scheduled for 2022, and construction set for 2024.

The third and final project on the Tier 1 list for 2018-2021 is improvements to the existing interchange of SR Loop 10 and SR 316. Project engineering is set for 2020, and construction is scheduled for 2024.

The Georgia Department of Transportation has uploaded to its web site for the Oconee Connector project three documents providing additional details about the proposed work at that site. 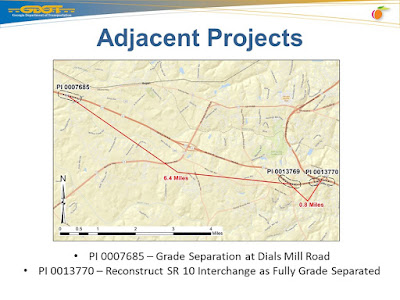 The Project Justification Statement says that “SR 316 is a primary east-west corridor in Northeast Georgia, connecting Atlanta and the Athens Metropolitan Area.

“In the section between I-85 in Gwinnett County and SR Loop 10 in Oconee County, access to SR 316 is currently provided by 9 grade-separated interchanges and 33 at-grade intersections,” according to the document.

The Oconee Connector serves as the “primary access road for traffic bound for Watkinsville and points south via U.S. 441,” according to the document. “SR 316 is a designated freight corridor.”

“The 2016 SR 316 Corridor Study for Oconee County confirmed a need to reconfigure this intersection as a grade-separated interchange to improve connectivity between the Atlanta and Athens metropolitan area,” the document continues.

The Scope of Services Task Order #1 states that “At this time, GDOT assumes the Oconee Connector would be raised over SR 316. However, the Consultant should consider a full range of alternatives to recommend the best concept to GDOT.”

“The Consultant shall develop the required plans and studies to achieve FY 2020 ROW Authorization and FY 2023 Construction Authorization.” the document continues.

“GDOT has two adjacent proposed projects along SR 316,” the document continues, and refers to the Dials Mill Extension interchange and the improvements to the SR Loop 10 interchange.

“Both projects are in-house GDOT designed projects and plans will be provided as available,” according to the document. “No activities have started on these projects to date. The Consultant should anticipate coordination with the project delivery teams for both adjacent projects.”

Shelby’s April 2018 PowerPoint presentation was targeted for a Project Team Initiation Process (PTIP) Meeting and consists of 17 slides. (Four of those slides are shown here in this post. Click on any one of them to enlarge it.) 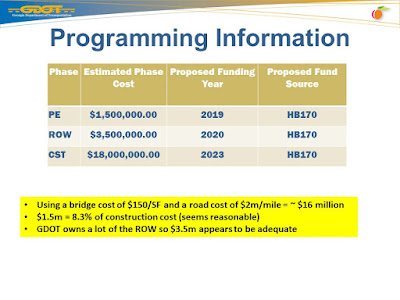 The slide contains the key elements of VanDyke’s Project Justification Statement and another slide labeling the Oconee Connector interchange with SR 316 as a “Crash Hotspot” based on a GDOT Crash Database for 2013 to 2017.

The intersection of SR Loop 10 with SR 316 also is listed as a “Crash Hotspot.”

Shelby lists right of way approval as being completed by June of 2020 and construction to begin in July of 2022, which is at the very beginning of Fiscal Year 2023.

The state already owns large parcels at the intersection, as the map above shows.

Construction is estimated to take 24 to 30 months, according to the PowerPoint.

Shelby’s PowerPoint contains details of a detour route for traffic while the new Oconee Connector interchange is being constructed. 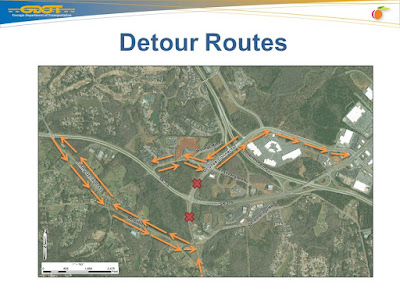 Eastbound traffic that now exists SR 316 at the Connector would exit instead at Jimmy Daniell Road and flow to Virgil Langford Road and then Mars Hill Road.

Westbound traffic that now enters SR 316 at the Connector would instead use Mars Hill Road, Virgil Langford Road and Jimmy Daniell Road to reach SR 316.

Westbound traffic that exists SR 316 at the Connector at present would exit instead on Virgil Langford Road and travel east to the Connector.

Traffic on the Connector that turns west on SR 316 at present would reach SR 316 via Virgil Langford Road.

The Boswell Group of Athens is listing 92 acres in nine separate tracts, two of them at the proposed Dials Mill Road intersection with SR 316.

Most of the listed property is on both sides of SR 316 and stretches from SR 316 to and across Aiken Road.

Another large parcel is between Aiken Road and SR 316 east of Pete Dickens Road and is surrounded by the county’s Gateway Business Park.

Boswell also is listing the property at the intersection of the Oconee Connector and SR 316 that Publix has identified as a possible grocery store and shopping center location.

Publix has applied for a permit from the U.S. Army Corps of Engineers to fill wetlands on that site.

Stacy Marshall, project manager at the Corps for the application, told me in an email exchange on Nov. 13 that she has no time line for making a decision on the permit application.

The public had until Nov. 21 to comment, and Marshall wrote that “After the Corps has gathered all the comments, once the notice expires, we will incorporate them into our Environmental Assessment (EA) of this proposed project.

“All comments will be sent to the applicant, as well,” Marshall wrote. “They will need to address the comments for the Corps to incorporate into our EA.

“All comments will be considered in our review process, however, the timeline for completing review is undetermined at this time,” Marshall wrote.

“We strive to issue a permit within 120 days of receiving a complete application, however, some Individual Permits can take up to a year, depending on the issues at hand,” according to the email.

“All applications are reviewed on a case by case basis, and have unique issues, so I can't make a prediction when a permit will be issued,” she continued.

What a mess! It’s always a worry when the Army Corp of Engineers gets involved with water. History shows the changing of waterways with dams, filling in wetlands and redirecting water will ultimately have big problems. Nature will always finds a way to reclaim changes over time and that will create continuous costs and upgrades. Let’s not ruin our beautiful Oconee County with Atlanta style intersections.

Clearly there is an immediate problem with the convoluted detour plan. Whoever is behind this plan needs some common sense thinking. All I can say is good grief let’s rethink what we want for Oconee County.


Isn’t it obvious, John Daniell is making all the decisions without any background in road design, transportation or planning. And the taxpayers are paying for it. However, Oconee’s small-minded approach will soon catch up with us. But not before a few folks benefit.