Oconee County’s expenditures and revenue for the first half of the 2020 Fiscal Year were on target with one exception, county Finance Director Wes Geddings said Tuesday in making his quarterly financial report to the Board of Commissioners.

The exception is sales tax collections, which were lower in November and December of 2019 than they were a year earlier, Geddings said.

Distributions lag collections by a month, so the November and December figures actually reflect taxes collected in October and November.

An examination of distributions for the entire first half of the Fiscal Year (July through December) shows that both LOST and SPLOST revenues were lower in four of the six months.

The January tax distributions–reflecting December collections and but not included in the second quarter financial report–also were down compared with January of 2019.

Before receiving the financial report on Tuesday, the Board of Commissioners unanimously approved a rezone request by Bill Ross for 62 acres between Old Epps Bridge Road and SR Loop 10 for a large retirement community and granted a variance allowing buildings in the community to exceed county height limits.

Geddings did not mention the January tax distributions, which reflected the busy holiday sales month of December. Those results were released on Jan. 31, or three days before the Feb. 4 Board of Commissioners meeting.

The distribution for LOST in January (for December tax collections) was down $38,744 from a year earlier, or 5.4 percent. Collections for LOST in December (for November) were down $42,723, or 6.9 percent.

“Expect that to pick back up,” he said. “But again, that’s collected and remitted by the state. So we’ll just see where that goes.”

In reviewing the SPLOST collections, Geddings told the Board that the number had been up in October (for September) and down in November and December.

“We’re six months into our sales tax collection,” Geddings said. The decline seen so far “is not enough to say we’re going to be down for the year. A couple of good months, and we’ll bounce right back.”

LOST and SPLOST, as well as the county’s Education Local Option Sales Tax, are each 1 percent taxes. LOST has more exemptions than SPLOST and ELOST, and LOST collections are considerably lower each month than are SPLOST collections.

Discrepancies between SPLOST and ELOST are small, and the Georgia Department of Revenue says they usually reflect differences in reporting that are subsequently corrected.

In his report on the second quarter of the fiscal year, Geddings only presented LOST and SPLOST distributions for the three months of the quarter–September, October, and November.

I downloaded data from the Georgia Department of Revenue to provide a picture of the trends across the last two years.

I included the ELOST collections to complete the picture, but ELOST is under the control of the Board of Education, not the Board of Commissioners, and was not included in Geddings’ report.

The charts all show the same thing. (Click any of the charts to enlarge it.)

Across the last 12 months, collections were lower in the most recent year than in the year before eight times. February, March, August, and October are the only exceptions. 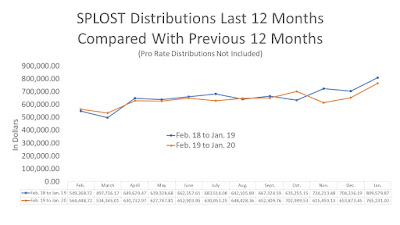 The Georgia Department of Revenue make two distributions during the year that are labeled as pro rata, meaning proportional.

This is an allocation of “unprocessable sales tax collections to all jurisdictions receiving local sales taxes on a pro rata basis,” according to the GDR. “This allocation is done at least twice per year for tax proceeds received for more than 90 days and after reasonable efforts have been made to distribute these funds to correct jurisdictions.” 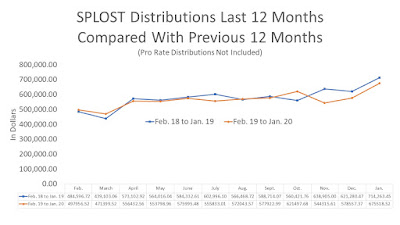 Geddings merged the pro rata and general monthly report for December in his presentation to the Board.

I did not merge the pro rata data in the charts shown here. 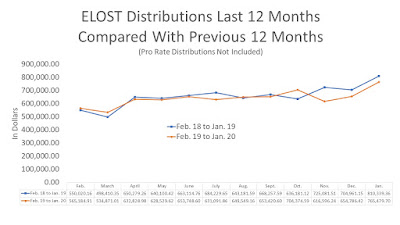 In the first seven months of the current 2020 Fiscal Year–including the pro rata distribution for December--the county collected a total of $4,127,722 from LOST and $4,670,659 from SPLOST.

These percentage reflecting the declines in collections are not comparable to those used by Geddings in his presentation for two reasons.

First, what I have presented is based on seven months, not the three months Geddings used in his report.

Second, Geddings averaged the monthly change rates for the three months he presented, while I used the change in the total amount of tax collected across the seven months.

Of total revenue projections for the current 2020 budget, 13 percent is to come from LOST and 17 percent from SPLOST. These figures come from the presentations Geddings gave to the Board last year before the budget was adopted.

In term of LOST, the county is collecting on average across the first seven months of the fiscal year $589,674. If that figure is multiplied by 12, the projected total is $7,076,094, or just above the budgeted amount.

If the SPLOST average of $667,237 for the first seven months is multiplied by 12, the projected collection would be $8,006,845, or considerably above the projected budget amount.

“With the taxes being down,” Commissioner William “Bubber” Wilkes asked Geddings at the end of the financial report, “do you think that could be from people ordering online and not paying any taxes?”

Geddings said “there’s some legislative things going on to fix all of that.”

Prior to 2018, based on state law and court cases, Georgia and other states required online retailers to charge sales taxes only if the company had a physical presence in the state. Amazon, for example, had a warehouse and distribution center in the state at that time.

Beginning on Jan. 1, 2019, retailers that made at least $250,000 in sales or had 200 individual sales a year in Georgia had to collect sales taxes or send a tax notice to their customers.

On Jan. 16 of this year, Georgia lawmakers passed a law requiring online businesses such as Amazon to collect taxes on sales by vendors who use their purchasing platform. Both Geddings and Commissioner Mark Saxon referenced this change in responding to Wilkes.

Oconee County representatives Houston Gaines and Marcus Wiedower voted in favor of what was House Bill 276, as did Oconee County Senator Bill Cowsert.

The bill is before Gov. Brian Kemp for his signature and is expected to be effective on April 1 of this year.

Geddings told the Board that the county has collected in the first six months of the Fiscal Year 74 percent of the projected revenue for the General Fund, which covers much of the financial activity of the county.

Geddings also showed a chart indicating that tax collection is lagging under the heading “Finance Department,” which includes the LOST revenues. All but 6 percent of the property tax revenue projected in the current budget has been collected, Geddings’ chart showed.

Spending in the General Fund is at 45 percent, Geddings reported.

Geddings said that only $198,606 remains in the SPLOST 2004 account, and that that money will be used for the ongoing construction of the expansion of the Courthouse.

The 2009 SPLOST account contains $218,800 for historic and scenic facilities, according to Geddings’ report. He said that money would be spent soon on a variety of projects recently presented to the Commission.

The county is currently making plans for SPLOST 2021, which is expected to be on the ballot in November.

The Board of Commissioners approved the rezone request by Ross Development Inc. for 62 acres that front on Dowdy Road and the Oconee Connector for a continuing care retirement community called Celebration Village Athens–Oconee Campus.

The final project will include 398 residential units. Epps Bridge Parkway is northwest of the site.

The Board also approved a variance request for the project that will allow the developers of Celebration Village to exceed the 40-foot maximum building height specified in county code. The buildings shall not exceed 55 feet in height, according to the condition of the variance granted.

Ken Beall of Beall and Company, representing property owner Ross Developments, spoke in favor of the project, as did Armand Vari of Active Senior Concepts of Suwanee, the developer of Celebration Village Athens–Oconee Campus.

I was the only citizen not connected to the project who spoke for or against the project.

I asked the Commission to approve the project as an appropriate buffer with residential properties along Dowdy Road and Old Epps Bridge Parkway and one that would produce much less traffic than would commercial development of the site.

The Board of Commissioners also approved the request by Vishab Brambhatt to rezone just less than 8 acres at 2063 Dials Mill Road to allow a subdivision of the property into three residential lots and the request of Meredith and Patrick Metcalf, 1191 Evans Road, to allow them to carve a 3.3 acre parcel from a larger 11-acre property so they can create an additional residential lot.

The video below is of the Feb. 4 meeting of the Board of Commissioners.

Discussion of the Ross rezone begins at 10:39 in the video.

Geddings gave his financial report at 38:30.

It seems as if there is never a rezone or variance that is not approved.

And very rarely should there be. If a project meets the criteria set forth by the UDC then private property right should allow the owner to change the zoning. All empty land in Oconee was zoned agricultural from when zoning started unless it has been previously rezoned. Even if that land is in the highest traffic commercial corridor in the county. If you wanted less rezones then maybe the land should be automatically zoned to the future land use map as it changes.

Is the change in SPLOST revenue at all contributable to how late Thanksgiving was this year? or the difference in how far UGA football went?

The state of the economy meeting forecast said that this year would be a net positive but not nearly the boom year that was last year.