In filing the revised Campaign Contribution Disclosure Report for Jan. 31, 2020, Wiedower changed the dates on 21 contributions that previously had been listed as having been received on Jan. 17, 22, and 23.

Wiedower, in his refiled report, moved the dates of the 21 contributions to dates prior to the start of the session on Jan. 13.

Wiedower said the date of deposit was used mistakenly in the report rather than the date of receipt of the contribution.

The complaint by R. Bruce Menke of Athens to the Georgia Government Transparency and Campaign Finance Commission is dated Sept. 8. Menke is listed as a member of the Athens-Clarke County Democratic Committee on the Party’s web site.

Wiedower’s 119th House District is about evenly split between Clarke and Oconee counties.

Jonathan Wallace, who held the 119th House District seat prior to Wiedower’s election in 2018, is the Democratic Party nominee competing against Wiedower in the election in November.

In an email message on Wednesday evening, Wiedower said “When a complaint is released to the media like this, it is usually just a political hit. That is all that is happening here.

“I take campaign compliance obligations seriously, and there was no violation of the Campaign Finance Act,” Wiedower said.

“In this case, all contributions were received and accepted before the legislative session started,” Wiedower’s note continued.

“Due to an oversight, when the campaign contribution disclosure report was prepared the date of deposit was used on the report rather than the date of receipt,” Wiedower wrote. “The campaign committee has filed an amendment to cure this technical defect.”

Charlie Upchurch III is listed as chair of the Campaign Committee, Friends of Marcus Wiedower, and Kelly Allison Wiedower is listed as treasurer.

In the revised filing, these 21 contributions were listed as having been made as early as Oct. 22 and as late as Jan. 12, or the day before the contributions became illegal.

The oldest contribution on the revised list, $1,000 from Larry Benson, was listed as having been received on Jan. 22 on the original list.

Gaines did not have any contributions listed after the General Assembly opened on Jan. 13.

Wallace, the Democratic candidate in the 119th District, listed $55,128 as available.

Three of Oconee County’s 12 precincts are in the 117th House District–Marswood Hall, Bogart and East Oconee.

Parts of Barrow, Jackson and Clarke make up the rest of the District, with Clarke dominating in terms of population.

The remaining nine precincts in Oconee County are in the 119th House District. 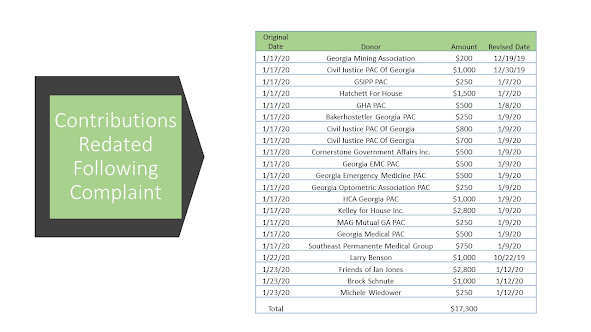