James Chafin said repeatedly in appearances during the campaign for District Attorney for the Western Judicial Circuit that he chose to run in the special election without a party label because he wanted to keep party politics out of the courtroom where the District Attorney operates.

Intentionally or not, his decision led to a campaign with strong partisan undertones that has spilled over into the runoff that will take place on Dec. 1 and for which early voting began on Monday morning.

Deborah Gonzalez, who ran as a Democrat and joins Chafin on the ballot in the runoff, was a featured speakers at the Oconee County Democratic Party meeting last Thursday. Chafin wasn’t invited.

Chafin, in turn, was a featured speaker at the Oconee County Republican Party meeting on Monday evening. Party Chair Steven Strickland did not invite Gonzalez, whom he labeled at a party meeting in September as a “far left Democrat.”

Republicans haven’t fielded a candidate in the District Attorney race in the Western Judicial Circuit, made up of Clarke and Oconee counties, since 2004, and no one ran with that label in the special election to fill the vacancy created when Democrat Ken Mauldin stepped down in February.

Chafin offered an alternative to Gonzalez and Democrat Brian Patterson in the Nov. 3 election, an analysis of data from the two counties shows, and he likely will play that role again in the Dec. 1 balloting.

Whether Republicans are motivated to cast a ballot in the race–the only one on the ballot–remains to be seen.

Gonzalez would seem to have an advantage on that front. She has served as state representative representing parts of the two counties and has stronger name recognition.

But it is such an unusual election that it is hard to even guess about who will turn out. In Oconee County, 959 voters turned out on the first of three days of early voting on Monday.

The three also spoke to Oconee County Democrats on Oct. 15.

Patterson spoke to the Republican Party on Sept. 28 and Chafin spoke on Oct. 26.

The Enterprise forum foreshadowed much of what followed in those exchanges. 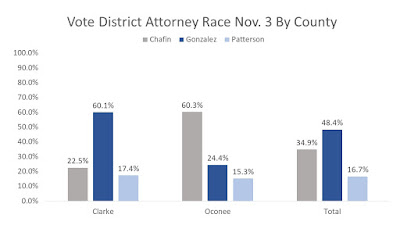 Chafin, currently serving as deputy chief assistant district attorney, focused on working within the school system to “show our youths that there is a better course for their lives than falling prey to gangs that recruit them at a very early age.”

Gonzalez, an Athens attorney, said she is “running on a criminal justice reform platform” and “What our community needs and wants is leadership and ways forward. And I have that leadership.”

Patterson, acting District Attorney, focused on his experience, saying in his job “I’ve been responsible for supervising 17 prosecutors, like Mr. Chafin” and “unlike my main opponent, who’s never set foot in a criminal court of law, I don’t need on-the-job training.”

“What happens in our courthouses is not entertainment,” Patterson said. “It is a serious legal job.”

Chafin and Gonzalez live in Athens-Clarke County, and Patterson lives in Oconee County.

When ballots were tallied, Gonzalez got 48.4 percent of the vote, Chafin got 34.9 percent, and Patterson got 16.7 percent. 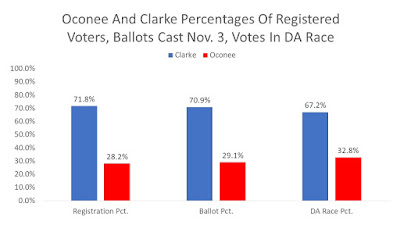 Patterson did just slightly better in Clarke County (17.4 percent of the vote) than in Oconee County (15.3 percent), but the differences were not great.

But Chafin got only 22.5 percent of the vote in Clarke County and 60.3 percent in Oconee County.

Gonzalez got the much larger percentage of the overall vote because 48,118 of the votes cast in the election (67.2 percent) were by Clarke County voters and the remaining 23,499 (32.8 percent) of the voters were in Oconee County.

Because Gonzalez did not get more than 50 percent of the vote, the election went to the runoff on Dec. 1.

Patterson has endorsed Chafin in the runoff.

The race is the only one on the ballot because Secretary of State Brad Raffensperger moved other state runoffs to Jan. 5, with the U.S. Senate runoff, but he did not move the local runoff for the District Attorney special election. 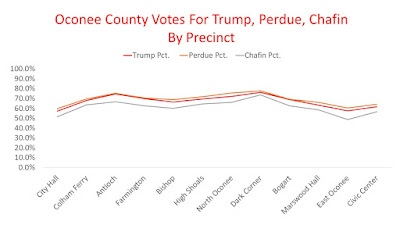 Clarke County had 71.9 percent of the registered voters on Nov. 3, but its turnout rate for the election was 67.7 percent, versus 85.5 in Oconee County.

That meant that Clarke County had 70.9 percent of the voters overall in the two counties for the Nov. 3 election, not the 71.8 percent that its registration advantage would have allowed.

In the final vote in the DA race, 67.2 percent of the votes came from Clarke County and 32.8 percent were from Oconee County.

A simple calculation of the final outcome based on the assumption that those who didn’t vote would have voted in the same way as those who did shows that, had Clarke County voters cast a ballot in this race equal to their registration, Gonzalez would have had 50.02 percent of the vote and not be in a runoff.

Had Clarke County and Oconee County voters who turned out gone down ballot at the same rate, Gonzalez still would have been under 50 percent–at 49.7 percent

In short, Chafin and Gonzalez are in the runoff because of Oconee County voters and their willingness to turn out in high numbers. 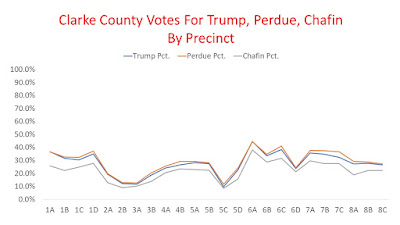 Precincts are geographically based, so they allow for this kind of analysis.

This is an imperfect approximation for looking at individual behavior, but it is the only one available absent data from individual voters.

What the precinct analysis shows quite clearly is that those precincts, both in Oconee County and in Clarke County, that voted for Republicans Donald Trump for President and David Perdue for U.S. Senator were the ones that voted for James Chafin for District Attorney.

Chafin may have lacked a party label on the ballot, but it seems that he became a surrogate Republican in the eyes of voters in both counties.

In 2004, challenger Morris Wiltshire, a Republican, got 44.4 percent of the vote in the race for District Attorney against then incumbent Ken Mauldin.

In 2000, when Mauldin ran his first race to succeed Democrat Harry Gordon as District Attorney, Republican Jim Smith got 38.8 percent of the vote.

Chafin, who now has Patterson’s endorsement, seems likely to do even better than Wiltshire and Smith, probably because of the growth of Oconee County, and to make a race of it on Dec. 1–depending on how many voters turn out to vote.

The video below is of the Nov. 19 meeting of the Oconee County Democratic Party.

Deborah Gonzalez spoke to the group, emphasizing the importance of turnout.

She was preceded by Lizzy Heurich from the Jon Ossoff campaign, talking about many of the same issues for the Jan. 5 runoff for U.S. Senate.

Audrey Haynes from the University of Georgia did not speak at the meeting because of a scheduling error.