Majority Of Clarke County Voters Prefers To Be Represented In Atlanta By Democrats, And Oconee Voters Help Make Sure They Aren’t

The clear majority of voters in Athens-Clarke County would like to be represented in the Georgia General Assembly in January by Democrats.

No Republican came forward to challenge incumbent Democrat Spencer Frye in the 118th House District–the only state legislative district wholly inside Clarke County–so Frye got 100 percent of the recorded vote.

Despite the preferences of Athens-Clarke County voters for Democrats, after last Tuesday’s elections, they will be represented by Republicans Houston Gaines in the 117th House District, Marcus Wiedower in the 119th House District, and Bill Cowsert in the 46th Senate District.

This is because the preferences of Republican voters in Oconee and other counties outweighed those of Democratic voters in Clarke County.

Oconee County is not part of the 47th Senate District, but voters outside Clarke County voted–against the wishes of Clarke County voters--to re-elect incumbent Republican Frank Ginn to represent that District as well.

The outcomes of the elections on Tuesday nearly guarantee that will not change when the General Assembly, again controlled by Republicans, takes up the task of redistricting following the release of data from the 2020 Census.

In an interview with WUGA’s Athens News Matters Hosts in early October, Gaines and Wiedower expressed some receptivity to turning redistricting over to a nonpartisan body.

“I’d rather there be some sort of, maybe, some computer” do the work to remove “human nature” from the process,” Gaines said. “So we’ll continue to look at proposals, certainly open to them,” he added.

“If there is a push and acceptance for a third party, I’m fine with that,” Wiedower said. “I want to stay, quite frankly, as far away from that subject as I can.”

Mokah Johnson and Wallace were strongly in favor of turning redistricting over to an independent body, but they won’t be involved in the process.

Democrats had hoped to pick up enough seats, including the 117th and 119th, to control the House, and they came up far short, picking up only two House seats across the state.

In that WUGA interview, neither Gaines nor Wiedower acknowledged how important the current configuration is to them and to continued control by Republicans of the General Assembly. 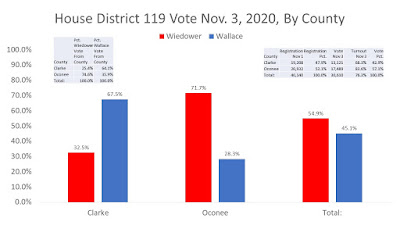 For the most part, Republicans held their own.

The power of Oconee County Republicans is particularly in evidence in House Districts 117 and 119.

In the end, 31.9 percent of Gaines’ votes came from Oconee, and only 38.7 percent of his vote came from Clarke County.

Oconee County’s influence is increased by its high turnout rate. Oconee’s turnout rate was 81.8 percent in that race, while Clarke’s was 70.3 percent.

The situation is much the same in the 119th. Wiedower got 71.7 percent of the vote in Oconee County and only 32.5 percent in Clarke County.

Turnout mattered as well. Oconee County had a registration percentage of 52.1, but its vote percentage was 57.1.

It is pretty safe to say that Gaines and Wiedower are Oconee County representatives, even though Gaines actually lives in Clarke County. (Both Wiedower and Wallace are from Oconee.)

District 117 and 119 are products of redistricting by the Republican-controlled General Assembly in 2011. 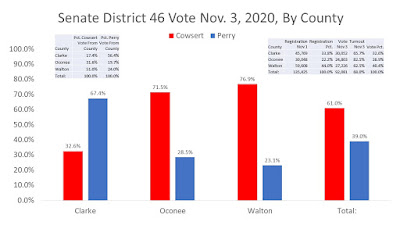 House District 115 was represented by Doug McKillip. McKillip had been elected as a Democrat but switched parties.

To create a Republican district for McKillip, the 115th became the 117th by adding in three precincts from Oconee County (Bogart, Marswood Hall, and East Oconee), as well as parts of Barrow and Jackson counties.

Clarke County also was split into two Senate Districts prior to redistricting in 2011, and the votes on Tuesday show why. 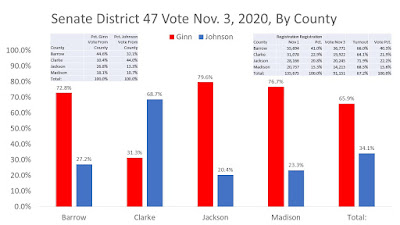 In the end, 31.6 percent of Cowsert’s vote came from Oconee County. Only 17.4 percent came from Clarke.

And as with the two House Districts, the high turnout rate in Oconee County added to its influence.

Oconee County had a registration percentage of 22.2, but its vote percentage was 26.9.

In the 47th Senate District, Ginn got only 31.3 percent of the vote in Clarke County, but he won overwhelmingly because he got 72.8 percent in Barrow, 79.6 percent in Jackson, and 76.7 percent in Madison.

In the end, only 10.4 percent of Ginn’s vote came from Clarke County.

Neither Cowsert nor Ginn is preferred in Clarke County, and their voters–to whom they are indebted--are elsewhere. 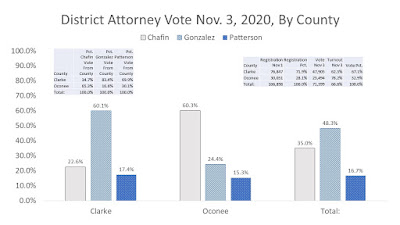 James Chafin chose to run without a party label in the special election to fill the position of District Attorney.

Chafin’s vote, in the end, was 65.3 percent from Oconee County.

Oconee County makes up only 28.1 percent of the registered voter in the two-county Western Judicial District, but it had 32.9 percent of the votes cast.

Chafin has forced Gonzalez into a runoff, which would not have been the case if Clarke County alone had been voting.

The different roles of Clarke and Oconee counties can also be seen in the 10th Congressional District race on Tuesday. 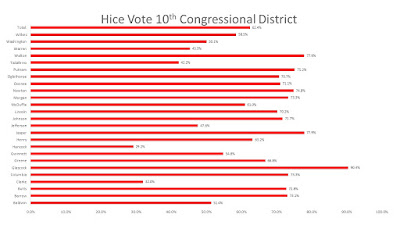 Incumbent Republican Jody Hice ended up with 62.4 percent of the vote, but the 25 counties that contribute wholly or in part to the district voted distictively.

Tabitha Johnson Green from Washington County in the far south of the District had little presence here, yet she got 68.0 percent of the vote in Clarke County compared with 28.9 percent in Oconee.

Clarke is once again split into two districts.

Andrew Clyde won the 9th Congressional District with 79.2 percent of the vote, but, even though he is a local businessman, he got only 27.6 percent of the Clarke County vote.

Are you saying it would be better for Republicans in Clarke County to have no chance at representation? The way it is currently drawn Democrats have the potential to be elected such and Gonzalez and Wallace previously.

I am merely describing the situation as reflected in the vote last week. A clear majority of voters in that county wanted one outcome last week. They got another.

It was one election. Different elections could produce a different outcome.

All,
This is just a reminder. I ask that those wishing to leave a comment to sign a real name or use a Google id that includes a real name.
Thanks.
Lee