The Northeast Health District added 237 cases of COVID-19 on Sunday with the release of the Department of Public Health Daily Status Report. The Report contained no new added deaths in the District from the disease.

The District actually added 238 confirmed cases of COVID-19 based on molecular tests, but the District had a net loss of one case based on antigen tests, reflecting the irregularity of laboratory reporting on the weekends and following the Friday holiday.

The seven-day rolling average of added cases declined to 376.7 on Sunday from 396.3 on Saturday.

The seven-day rolling average of added deaths in the District dropped to 2.1 on Sunday from 2.3 on Saturday.

The Georgia Hospital Association (GHA) and the Georgia Emergency Management Agency (GEMA) reported on Sunday that the number of COVID-19 patients at area hospitals (223) increased by 12 from the day before.

The number of patients with COVID-19 at area hospitals has increased each day since Dec. 23 and it at a level never reported before.

On Sunday, 41.2 percent of the patients in area hospitals were COVID-19 patients, the highest percentage ever and up from 38.9 on Saturday. Across the state as a whole, that figure was 27.7 percent on Sunday, up from 27.2 on Saturday.

At area hospitals, the number of ICU beds in use (67) was up by three from Saturday, and the number of adult ventilators in use (41) increased by two from the day before.

Across the state, according to the Daily Status Report on Sunday, molecular and antigen tests identified 3,652 new cases of COVID-19, and the seven-day rolling average of added cases dropped from 6,878.7 on Saturday to 6,567.7 on Sunday. 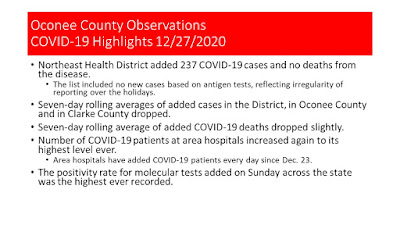 The state added only 15,054 molecular tests on Sunday, the smallest number added since Dec. 6 and about half the number added on Saturday.

The percentage of those tests that were positive, however, was 18.1, the highest number going back to June 3,when those data were first released to the public.

The state added five deaths from COVID-19, and the seven-day rolling average of added deaths increased just slightly from 40.3 on Saturday to 40.7 on Sunday.

The Daily Status Report on Sunday did not include any “probable deaths” from COVID-19.

The Department of Community Health does not issue its Long-Term Care Facility Report on weekends and has not issued its Report since Tuesday.

The charts below are based on data from the Department of Public Health Daily Status Report and have been updated to include data from the release of that report at 2:50 p.m. on Sunday.

Chart 1 shows the rolling averages of COVID-19 cases for the Northeast Health District and for the state of Georgia.

Charts 2 and 3 show actual deaths and rolling averages of added deaths for the Northeast Health District (Chart 2) and for the state of Georgia (Chart 3).