The Northeast Health District added 507 new cases of COVID-19 on Sunday, resulting in an increase in the seven-day rolling average of added cases per day to 559.0 from 550.7 on Saturday.

The 10-county Northeast Health District did not add any deaths from the virus in Sunday’s Department of Public Health Daily Status Report, and the seven-day rolling average of added deaths remained unchanged at 2.9.

Saturdays and Sundays are days when labs and medical facilities report few cases and deaths to the Department of Public Health (which reports those figures on Sundays and Mondays), and the number of cases reported last Sunday was 449 and the number of deaths was zero.

Oconee County Schools has reported at least two positive tests for COVID-19 since the system released its COVID-19 Status Report on Friday.

Tony McCullers, principal at Colham Ferry Elementary School, sent parents an email at 6:38 p.m. on Saturday informing them that an “individual in our school” tested positive. Kevin Yancey, principal at Oconee County High School, sent the same form email to parents at 2:39 p.m. on Sunday regarding “an individual” at that school who tested positive. 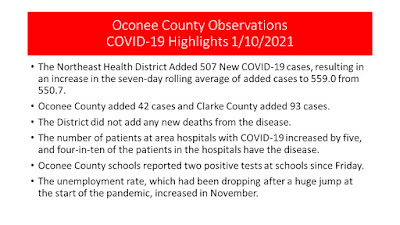 The percentage of patients at area hospitals with COVID-19 was 42.4 at the beginning of the day on Sunday, compared with a statewide figure of 33.5. The local percent has been above 40 since Jan. 2. The percent had been 40.4 on Saturday.

When COVID-19 hit last spring and the state initiated restrictions on business operations, the economy took a significant hit, as reflected in unemployment rate of 12.2 percent in April, down from 4.5 percent the month before.

Unemployment rates had largely recovered in October, with a state rate of 4.4 percent, a rate in Oconee County of 2.2 percent, and a rate in Clarke County of 4.3 percent.

Clarke County also had recorded declines during that period with one exception.

Sales tax collections have become very erratic in recent months because of irregularities in collections by the state.

The Department of Public Health added 8,411 new cases of COVID-19 across the state with the release of the Sunday Daily Status Report, pushing up the seven-day rolling average to 9,668.0 from 9,319.7 on Saturday. The new rolling average is the highest ever recorded.

Across the state, only two new deaths from the disease were recorded. Three deaths had been recorded on Sunday of last week, so the new seven-day rolling average dropped to 56.0 from 56.1 on Saturday.

Both of the added deaths occurred in the last 14 days. One was on Jan. 7 and the other on Jan. 8.

The state did not add any new “probable deaths” from COVID-19. In fact, it removed one death it has previously recorded.

The number of COVID-19 patients is the highest it has ever been.

The Department of Community Health does not release its Long-Term Care Facility Report on Sundays.

Similarly, the Department of Public Health did not update on Sunday its report on vaccinations administered.

The data come from the Department of Public Health Daily Status Report and have been updated for the 2:50 p.m. Report on Sunday.