With the addition of 681 new cases of COVID-19 in state reports on Friday, the seven-day rolling average of added cases in the Northeast Health District increased to 467.0 cases per day, the highest ever recorded.

The deaths bring to 17 the number from the disease in Madison County, to 88 in Walton County, and to 408 in the 10-county District as a whole.

The seven-day rolling average of added deaths in the District increased to 1.9 on Friday from 1.7 on Thursday.

The number of COVID-19 patients at area hospitals has increased each day since Dec. 23 and at 248 is the highest level ever recorded. COVID-19 patients make up 39.1 percent of the patients in the hospitals. That figure was higher only once, on Dec. 27.

The hospitals have expanded their ICU capacity to handle the demand and now report having 74 beds available, rather than the usual 70, and only one of those beds is unoccupied.

The GMA data are reported as being current as of the beginning of the day on Friday. The data are for Region E of GEMA, which consists of the 10 counties of the Northeast Health District plus Hart and Franklin counties. The Region has nine hospitals. The largest and dominant hospitals with the vast majority of the beds are the two in Clarke County.

Across the state, the Daily Status Report listed 11,511 new cases of COVID-19 on Friday, and the seven-day rolling average of added cases increased from 7,054.1 on Thursday to 7,800.6 on Friday. 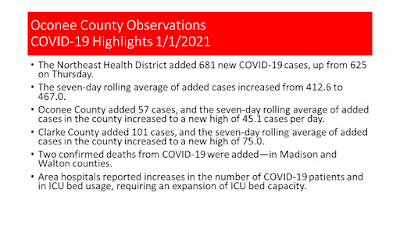 The Daily Status Report listed 17 new deaths from the disease, and the seven-day rolling average of added deaths dropped from 38.7 on Thursday to 34.1.

All 17 of the added deaths occurred in the last 14 days, and the seven-day rolling average of added deaths based on date of occurrence increased just slightly from Thursday to Friday.

These data on vaccine distributions and receipt are not available on the CDC site at the county level.

Georgia is joined by Ohio , Kansas, and Mississippi as the four states in the country with fewer than 500 people per 100,000 receiving the first shot.

The Department of Community Health did not issue its Long-Term Care Facility Report on Friday.

The charts below are based on data from the Department of Public Health Daily Status Report and have been updated to include data from the release of that Report at 2:50 p.m. on Friday.

Chart 1 shows the rolling averages of COVID-19 cases for the Northeast Health District and for the state of Georgia.

Charts 2 and 3 show actual deaths and rolling averages of added deaths for the Northeast Health District (Chart 2) and for the state of Georgia (Chart 3).

So much appreciate this information. Thanks for including what data are available for the vaccine. I know the local hospitals are stressed due to knowing people who work there. I feel so thankful for their efforts and so sorry that people are not doing more to reduce the increasing levels of infection. Again, thanks for all you do.