The Department of Public Health added 15 confirmed deaths from COVID-19 in the Northeast Health District with release of Saturday’s Daily Status Report.

The deaths were spread across six of the 10 counties in the District, with Clarke County adding two. Clarke County has added five deaths in the last three days.

The 15 deaths were not a record. That record was 19 and was set on Saturday of last week.

The seven-day rolling average of added confirmed deaths actually declined on Saturday to 8.6 from 9.1 on Friday. The tally for the Northeast Health District is now 654 deaths attributed to COVID-19.

The Clarke County Deaths were of an 85-year-old female and an 89-year-old male, neither of whom had a chronic condition.

The Northeast Health District added 221 new cases of COVID-19 in Saturday’s Daily Status Report, and the seven-day rolling average of added cases dropped to 251.3 from 270.9 on Friday. 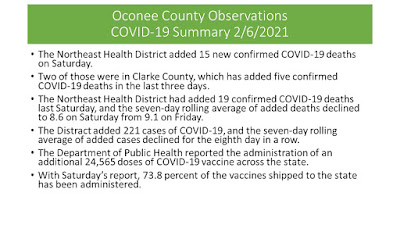 The rolling average has dropped eight days in a row.

Principal Michael Eddy of Malcom Bridge Middle School informed parents of students at that school on Friday evening of “an individual” at the school who had tested positive for COVID-19.

That email from Eddy went out after the school released its end-of-week report showing a decrease in the number of Active Cases and Active Quarantines in the system's schools.

Across the state, the Daily Status Report listed 179 confirmed COVID-19 deaths on Saturday, and the seven-day rolling average of added deaths increased to 108.9 from 106.0.

The 179 added confirmed deaths is a new record.

One hundred and five of those deaths were in the last 14 days, and the seven-day rolling average of added deaths by date of occurrence increased on Saturday from Friday.

The Department of Public Health eliminated one death from it archive of deaths attributed to COVID-19.

The Department of Public Health listed 54 new “probable deaths” from COVID-19 in Saturday’s Daily Status Report, and the seven-day rolling average of added “probable deaths” increased just slightly to 19.7 from 19.4 on Friday.

The Department of Public Health reported administration of an additional 24,565 new doses of COVID-19 vaccinations on Saturday, down from 48,640 on Friday.

The state received no additional allocations of the vaccines on Saturday and no new shipments of allocated doses. On Saturday, all but 19,500 of the allocated doses have been shipped, and 73.8 percent of the 1,553,450 shipped vaccinations have been administered.