One of the three confirmed deaths from COVID-19 reported by the Georgia Department of Public Health in its Northeast Health District on Friday was in Clarke County, bringing to three the number of deaths in the county from the disease in the last two days.

The Department of Public Health, in its Friday Daily Status Report, listed 226 new cases of COVID-19, and the seven-day rolling average of both added confirmed deaths and added cases declined.

The Clarke County death was of a 90-plus-year-old female without a known chronic condition.

The confirmed COVID-19 deaths were the 95th in Clarke County, the 101st in Barrow County, and the 18th in Oglethorpe County, and they brought to 639 the total in the 10-county Northeast Health District.

The seven-day rolling average of added confirmed deaths fell to 9.1 on Friday from 10.4 on Thursday. On Friday of last week, the District had added 12 deaths.

The District did not add any “probable deaths” in Friday’s Daily Status Report.

The addition of the 226 new cases of COVID-19 resulted in a drop in the seven-day rolling average of added cases to 270.9 on Friday from 301.7 on Thursday.

The seven-day rolling average has fallen seven days in a row and is below 300 for the first time since Dec. 12.

The Department of Community Health in its Long-Term Care Facility Report on Friday listed five new cases of COVID-19 among residents of long-term care homes in the Northeast Health District.

Three of these were The Oaks Athens Skilled Nursing in Clarke County and two were at Hollander Senior Living personal care home in Walton County.

The Department of Community Health not report any COVID-19 deaths in the Northeast Health District in its report or any new cases among staff of the 40 facilities covered in its listing.

Oconee County Schools reported 13 Active COVID-19 Cases in the system’s 11 schools on Friday, down from 25 a week earlier, and 97 Active Quarantines Due To Close Contact, down from 166 last Friday.

The school system does not provide any information about those active cases, but principals at the school do inform parents when someone in the schools has tested positive for COVID-19.

Parents have forwarded to me since last Friday messages from the principals of Dove Creek Elementary School, Malcom Bridge Middle School, and both North Oconee High School and Oconee County High School.

The Daily Status Report listed 98 confirmed COVID-19 deaths on Friday, and the seven-day rolling average of added deaths fell to 106.0 from 111.4 on Thursday. 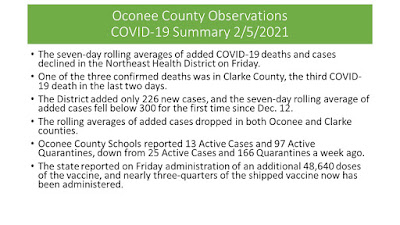 Fifty-three of the added deaths occurred in the last 14 days, and the seven-day rolling average of added deaths dated by occurrence fell slightly on Friday from Thursday.

The count of 53 deaths in the last 14 days is almost certainly an underestimation by one.

On Thursday, a death was entered in the state data file for Feb. 2, 2020, which would make it the earliest death from COVID-19 in the state.

No other death had been recorded until March 5, and the entry on Thursday of the death for Feb. 2, 2020, most likely is simply a data entry error and should have been for Feb. 2, 2021.

I have summed deaths from March 2 in Excel in the data files released by the state each day to check on the figures reported on the web page. I found the discrepancy of one in my calculations on Thursday but did not understand the reason for that discrepancy until Friday.

No doubt, some of the decrease in cases is the result of decreased testing, as health resources have been shifted to vaccinations.

The seven-day rolling average of added molecular tests fell to 31,215.4 on Friday, the lowest level since Jan. 10.

But the positivity rates of those added tests, based on the date they have been reported, also has been declining.

The Department of Public Health reported administration of an additional 48,640 new doses of COVID-19 vaccinations on Friday, up from 42,610 on Thursday.

The state received no additional allocations of the vaccines on Friday and no new shipments of allocated doses. On Friday, all but 19,500 of the allocated doses have been shipped, and 72.2 percent of the 1,553,450 shipped vaccinations have been administered.

The data in the charts come from the Department of Public Health Daily Status Report and have been updated for the 2:50 p.m. Report on Friday.