A confirmed death was recorded in seven of the 10 counties in the Northeast Health District.

In addition, two deaths–one in Clarke County--were reported by the Department of Community Health in its Long-Term Care Facility Report on Thursday.

The Oconee County confirmed death was of an 86-year-old female without a chronic condition. Oconee had added a death on Wednesday and two on Tuesday and now has 50 deaths attributed to the disease.

The deaths brought the totals to 37 in Elbert County, 102 in Jackson County, 29 in Madison County, and 17 in Oglethorpe County.

Oglethorpe County has the smallest population of any of the 10 counties in the Northeast Health District, but it ranks fourth from the bottom in terms of confirmed deaths per 100,000 population.

Elbert County has the highest death rate per population in the District, and it also is tied with Walton County for most “probable deaths.”

The District as a whole now has 636 confirmed deaths from COVID-19, and the seven-day rolling average after the addition of the nine deaths on Thursday increased to 10.4 from 10.1 on Wednesday.

The Clarke County death listed in the Department of Community Health Report was at The Oaks Athens Skilled Nursing.

The rolling average has now dropped six days in a row.

Oconee County schools advised parents of students at Malcom Bridge Middle School, North Oconee High School, and Oconee County High School of one “individual” at each school who had tested positive on Thursday.

The Department of Community Health did not release its Long-Term Care Facility Report for Wednesday until after midnight.

Between the release of the Tuesday report and the release of the Thursday Report, the Department of Community Health identified four additional cases of COVID-19 among residents of the Northeast Health District’s 40 long-term care facilities covered by the Report.

Three of the resident cases were at Gateway Gardens in Barrow County and the fourth was at The Pearl at Loganville personal care home in Walton County.

One of the staff cases was at High Shoals Health and Rehabilitation nursing home 3450 New High Shoals Road in Oconee County, and the other was at Mulberry Grove personal care home in Barrow County.

Across the state, the number of added deaths in the Daily Status Report was 141, and the seven-day rolling average of added deaths declined slightly to 111.4 from 112.3 on Wednesday. 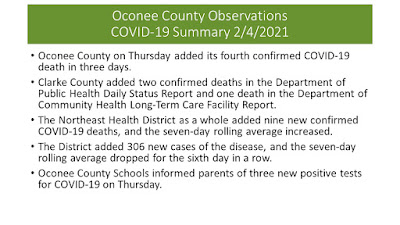 Ninety of the added deaths were in the last 14 days, and the seven-day rolling average of added deaths dated by day of occurrence increased on Thursday as it has the last three days.

The Georgia Hospital Association (GHA) and the Georgia Emergency Management Agency (GEMA) did not release data on hospital patients and hospital facility use until nearly midnight on Wednesday.

Because of the way the data are presented, it isn’t possible to retrieve the Wednesday data at the state level.

The Department of Community Health reported COVID-19 at 715 long-term care facilities across the state, down from 717 on Tuesday. The decline is a reporting error because facilities are not supposed to remove themselves from the list once they have reported a case among residents and/or staff.

The Department of Public Health reported administration of an additional 42,610 new doses of COVID-19 vaccinations on Thursday, down from 46,518 on Wednesday.

The state received no additional allocations of the vaccines on Thursday and no new shipments of allocated doses. On Thursday, all but 19,500 of the allocated doses have been shipped.

The data in the charts come from the Department of Public Health Daily Status Report and have been updated for the 2:50 p.m. Report on Thursday.

Thanks so much for your efforts and persistence.