The Northeast Health District added 143 new cases of COVID-19 with the release of Monday’s Department of Public Health Daily Status Report and two confirmed deaths from the disease.

The addition of the new cases resulted in an increase in the seven-day rolling average of added cases to 174.7 from 170.9 on Sunday. The District had added 116 cases last Monday.

The addition of the two confirmed deaths resulted in a decrease in the seven-day rolling average of added deaths to 5.9 on Monday from 6.3 on Sunday. The District had added five deaths on Monday of last week.

The confirmed deaths were of a 60-year-old female in Barrow County and of a 61-year-old male in Greene County. Neither had a chronic condition.

The District as a whole now has 700 deaths from the disease recorded since deaths from COVID-19 were first recorded in the state on March 5 of 2020. The first confirmed death in the Northeast Health District was on March 24 of last year. 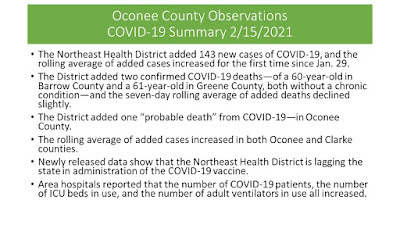 The Department of Community Health, in its Monday Long-Term Care Facility Report, listed three additional COVID-19 positive staff in the 40 long-term care facilities in the Northeast Health District covered by its report.

Unrelated to COVID-19, Anisa Sullivan Jimenez, director of Communications for Oconee County Schools, sent out a notification at 9:27 p.m. on Monday that schools will operate on a two-hour delay on Tuesday.

“Out of an abundance of caution after monitoring local weather conditions,” Jimenez wrote, “Buses will run two hours later than their normal time” but “lunch will be served, and dismissal times will not change.”

The Department of Public Health created a new dashboard on Monday to differentiate between administration of first and second doses of the vaccine and to provide data on doses by county.

The county data report doses by county of administration, however, not by county of residence of the person who received the vaccine.

The web site explains under the Data Description Tab that “Vaccine Doses Administered By county” is “Total number of vaccine doses administered by a provider in that county. If provider county is missing, county of residence is used when present.”

When I received my first vaccination at the Clarke County Public Health Department (based on my registration through the Department of Public Health Northeast Health District web site), I gave my address (which lists my address as Athens), but I also was asked my county, and the health care worker said she recorded Oconee.

So the Department of Public Health is able to report data on doses administered by county of residence but has not yet done so.

The Department of Public Health web site for the 10-county Northeast Health District states that priority will be given to residents of the District, meaning few persons outside the District likely would be included in the released data for the 10 counties in the District.

For that reason, the data for the District as a whole are probably more informative than the available data by county.

I scrolled through the web page and recorded the administration by dose of each of the 10 counties in the District and then computed the percentage of residents who received Dose 1 and Dose 2.

Since two doses are required, the percent who received Dose 2 have been fully vaccinated.

The data show that the District as a whole, based on these calculations, is lagging the state in vaccinations.

In the Northeast Health District 2.4 percent of the residents have been fully vaccinated at this time, compared with 3.7 percent statewide.

Elbert County, which has not followed the state guidelines for administration of the vaccine, has the largest number of Dose 1 administrations per population, followed by Clarke County.

The number of COVID-19 patients had decreased for seven days in a row prior to Monday.

In contrast to the Northeast Health District data, the Department of Public Health added 2,189 new cases of COVID-19 across the state on Monday, and the seven-day rolling average of added cases dropped to 3,486.0 from 3,579.0 on Sunday.

The Department of Public Health added 33 new confirmed COVID-19 deaths across the state on Monday, and the seven-day rolling average of added confirmed deaths fell just slightly to 92.9 from 93.1 on Sunday.

Fifteen of the 33 added confirmed deaths occurred in the last 14 days, and the seven-day rolling average of added deaths dated by occurrence increased on Monday from Sunday.

The Department of Public Health added 24 “probable deaths” from COVID-19, and the seven-day rolling average of added probable deaths increased to 23.1 from 20.1 on Sunday.

As of Monday, 74.3 percent of the shipped doses had been administered.

The data in the charts come from the Department of Public Health Daily Status Report and have been updated for the 2:50 p.m. Report on Monday.