The Northeast Health District recorded five confirmed COVID-19 deaths in Tuesday’s Daily Status Report from the Department of Public Health and 214 new cases of the disease.

One of those five confirmed deaths was in Oconee County, and two were in Clarke County. The remaining two were in Walton County.

The seven-day rolling average of both confirmed deaths and cases in the 10-count Northeast Health District fell again on Tuesday.

The Oconee County confirmed death was of a 90-plus-year-old female without a chronic condition. The death brings to 51 the number from COVID-19 in the county.

The Walton County deaths were of a 65-year-old female and a 78-year-old male, neither of whom had a chronic condition. Walton County has the largest number of confirmed COVID-19 deaths in the 10-county Northeast Health District with 171.

The Monday Report listed two new COVID-19 cases among residents of the Northeast Health District’s 40 long-term care facilities covered by the report and one new staff case. The changes are from the Friday Report. The Department of Community Health does not issue its reports on the weekend.

The two new resident cases were at The Oaks--Athens Skilled Nursing in Clarke County, and the staff case was at Greene Point Health and Rehabilitation nursing home in Greene County.

The Daily Status Report added 123 confirmed COVID-19 deaths across the state on Tuesday, and the seven-day rolling average of added deaths decreased to 102.4 from 108.0 on Monday. 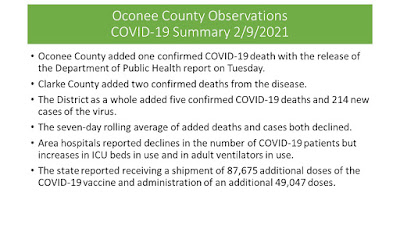 Seventy-two of those deaths were in the last 14 days, and the seven-day rolling average of added deaths dated by day of occurrence increased on Tuesday from Monday.

The Department of Public Health eliminated two deaths previously listed as due to COVID-19 from its archives.

The Department of Public Health on Tuesday reported adding 51 “probable deaths” from the disease, and the seven-day rolling average of added deaths increased just slightly to 20.3 from 20.0 on Monday.

The Department of Community Health reported that COVID-19 was present in 714 of the state’s long-term care facilities. That number had been 715 on Friday, and the drop represents a reporting error.

The Department of Public Health reported administration of an additional 49,047 new doses of COVID-19 vaccinations on Tuesday, up from 40,546 on Monday.

The state received an additional shipment of 87,675 doses of the vaccine on Tuesday.

The data in the charts come from the Department of Public Health Daily Status Report and have been updated for the 2:50 p.m. Report on Tuesday.