With Addition Of Six Confirmed COVID-19 Deaths And 165 Cases In Northeast Health District, Averages Of Deaths And Cases Decline

The Northeast Health District added six confirmed deaths from COVID-19 and 165 new cases of the disease with the release of the Department of Public Health Daily Status Report on Wednesday.

The Northeast District as a whole now has 670 confirmed COVID-19 deaths, and the seven-day rolling average of added deaths on Wednesday was 6.1, down from 7.3 on Tuesday.

The Northeast Health District added 165 new COVID-19 cases on Wednesday, and the seven-day rolling average of added cases dropped to 204.9 from 226.7 on Tuesday. 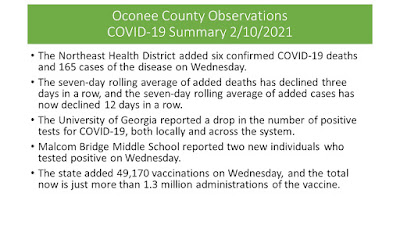 The University of Georgia, in its COVID-19 Health and Exposure Update on Wednesday, reported a drop in locally administered positive COVID-19 tests to 81 for the week of Feb. 1 to 7 from 124 a week earlier.

The total number of COVID-19 positive tests, including tests not administered in Clarke County, dropped to 115 from 181.

The positivity rate of tests administered at Legion Field fell to 1.6 percent from 2.6 percent. The Legion Field tests are for those without symptoms who drop in for a tests. The number of tests in the Feb. 1 to 7 period was 2,478, up from 2,428 the week before.

Mike Eddy, principal at Malcom Bridge Middle school, informed parents of students at the school in an email message at 6:31 p.m. on Wednesday that “two individuals” at the school had tested positive on that date.

Eddy also had written to parents of students at Malcom Bridge Middle School on Friday, after the weekly report by school system, of “an individual” at the school who had tested positive. The school also had had two cases last week.

The Tuesday Report included no new deaths or COVID-19 cases from Monday among residents or staff at the Northeast Health District’s 40 long-term care facilities included in the Report.

The state added 121 confirmed COVID-19 deaths in the Wednesday Daily Status Report, and the seven-day rolling average of added deaths decreased to 100.3 from 102.4 on Tuesday.

Fifty-eight of those cases were in the last 14 day, and the seven-day rolling average of added deaths dated by day of the death increased on Wednesday from Tuesday.

The Department of Public Health eliminated tree deaths previously listed as caused by COVID-19, including one on March 25 of last year!

The Department of Community Health reported in its Tuesday Report that COVID-19 was present in 711 of the state’s long-term care facilities. That number had been 714 on Monday, and 718 at its high point on Jan. 28.

Facilities self-report and are supposed to file data every day once a case or death has been reported, so the decline is reporting error.

The Department of Public Health reported administration of an additional 53,170 new doses of COVID-19 vaccinations on Wednesday, up from 49,170 on Tuesday.

The state received an additional shipment of 62,400 doses of the vaccine on Wednesday.