Seven of the 10 counties in the Northeast Health District reported a COVID-19 death on Wednesday with the release of the Department of Public Health Daily Status Report.

The total number of added confirmed COVID-19 deaths in the Daily Status Report was 14, and the Report added 325 new cases of the disease.

One of those confirmed deaths was of an 80-year-old male with a chronic condition in Oconee County.

Oconee County had added two deaths on Tuesday, and the death on Wednesday brings to 49 the number of confirmed deaths in the county from the disease.

Greene County had an 80-year-old male without a chronic condition as its 36th death from the disease.

Morgan County recorded only its 10th death from COVID-19 on Wednesday, of an 87-year-old female without a known chronic condition.

Age alone is not an indicant of a chronic condition as is reflected in the classification of deaths by the Department of Public Health.

The Department of Public Health defines “Comorbidity Status” (or chronic condition) as indicating “whether a confirmed case has or had any comorbid or simultaneously existing diseases or underlying conditions that would make the individual more susceptible to severe outcomes.”

The Department of Public Health also listed one “probable death” from COVID in the Wednesday Daily Status Report. No characteristics of that death are provided other than that it was in Clarke County.

The 325 added cases of COVID-19 listed in the 10 counties of the Northeast Health District in Wednesday’s Daily Status Report produced a seven-day rolling average of added cases of 314.4, down from 316.7 on Tuesday. 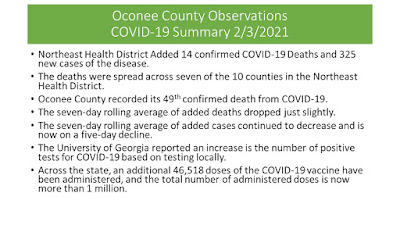 This is the fifth day running in which the rolling average of added cases declined.

The University of Georgia, in its COVID-19 Health And Exposure Updates on Wednesday, reported 124 local positive COVID-19 for the week of Jan. 25 to 31, up from 122 for the week earlier.

The total number of positive tests, including those not reported in Clarke County, fell from 201 to 181, but out-of-county tests are often recorded later.

The positivity rate for tests at the walk-in facility at Legion Field increased just slightly to 2.6 from 2.5 percent a week earlier.

The Department of Community Health did not issue its Long-Term Care Facility report as of late on Wednesday evening.

The Georgia Hospital Association (GHA) and the Georgia Emergency Management Agency (GEMA) also did not update their reports on Hospital Beds and Ventilator Use and Medical Facility Patient Census as of late on Wednesday.

With the release of the Wednesday Daily Status Report containing the confirmed deaths of 136 individuals from COVID-19, the seven-day rolling average of added deaths decreased slightly to 112.3 on Wednesday from 112.7 on Tuesday.

Eighty-four of the added deaths occurred in the last 14 days, and the seven-day rolling average of added deaths dated by occurrence increased on Wednesday, as it had on Tuesday.

The Department of Public Health eliminated a death previously recorded for Jan. 12 from its list of confirmed COVID-19 deaths.

Across the state, the Daily Status Report listed 5,264 new cases of COVID-19 on Wednesday, and the seven-day rolling average of added cases decreased to 5,503.1 from 5,699.3 on Tuesday.

Added cases have now declined eight days in a row across the state, and the data suggest part of that decline is due to decreased testing, perhaps as a result of the shift to administration of the vaccine.

Offsetting this decline in testing is a decline in the positivity rate for molecular tests.

On Wednesday, 11.8 percent of the tests reported that day were positive, and the seven-day rolling average of molecular test positivity had fallen to 13.0 from 13.5 on Tuesday.

That rolling average of test positivity had been 19.9 percent on Jan. 8.

Comparable data on number of antigen tests and positivity of those tests is not being reported by the Department of Public Health.

The Department of Public Health reported administration of an additional 46,518 doses of the COVID-19 vaccine on Wednesday, up from 29,568 on Tuesday.

The state received an additional shipment of 26,950 doses on Wednesday, for a total of 1,553,450 doses. The state has administered 66.4 percent of the shipped vaccines.