For the second day in a row, the rolling averages of both confirmed COVID-19 deaths and cases of the disease increased in the Northeast Health District on Thursday with the release of the Department of Public Health Daily Status Report.

The District added nine new deaths from COVID-19 and 179 new cases of the disease.

Walton County now has 204 confirmed deaths from COVID-19, the most of any of the 10 counties in the Northeast Health District. Green has 46, Jackson 120, Morgan 14, and Oglethorpe 26.

The District as a whole now has 778 confirmed deaths from COVID-19, and the seven day rolling average of added deaths from the coronavirus increased to 7.7 on Thursday from 7.4 on Wednesday. The average had fallen to 6.0 on Tuesday. 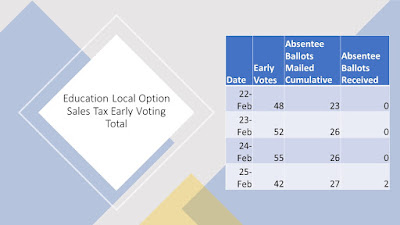 The increases in the seven-day rolling average in both Oconee and Clarke followed small increases on Wednesday as well.

Philip Brown, principal at North Oconee High School, sent parents of students at the school an email at 7:04 p.m. on Thursday informing them that “an individual” at the school had tested positive for COVID-19.

The Department of Community Health had not released its Long-Term Care Facility Report by late on Thursday evening.

The Northeast Health District added 2,197 vaccinations on Thursday, up from 1,619 on Wednesday; 1,093 of the added vaccinations were first doses, and 1,104 were second doses.

The total number of the second doses represents 4.0 percent of the District’s 530,630 residents.

Across the state on Thursday, the Daily Status Reported listed 107 new deaths attributed to COVID-19, and the seven-day rolling average of added confirmed deaths dropped to 91.3 from 92.0 on Wednesday. 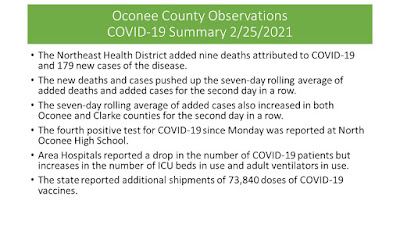 Thirty-seven of the added deaths occurred in the last 14 days, and the seven-day rolling average of added deaths dated by day of occurrence increased on Thursday from Wednesday.

The Department of Public Health reported administration of 50,441 new doses of COVID-19 vaccinations on Thursday, up from 40,749 on Wednesday. The number of first doses was 21,617, and the number of second doses was 28,824.

As of Thursday, 81.4 percent of the doses shipped to the state had been administered.

The data in the charts come from the Department of Public Health Daily Status Report and have been updated for the 2:50 p.m. Report on Thursday.