The seven-day rolling averages both of added COVID-19 deaths and of added cases increased in the Northeast Health District on Wednesday with the release of the Department of Public Health’s Daily Status Report.

The 10-county District added 11 confirmed deaths, including three in Clarke County, and 178 cases.

Barrow County had one death listed in the Daily Status Report: a 70-year-old male with a chronic condition. Barrow County now has 115 confirmed COVID-19 deaths.

The final two deaths were in Walton County: an 84-year-old female and an 87-year-old male, neither of whom had a chronic condition. Walton County now has 199 confirmed deaths from COVID-19.

The Northeast Health District has 769 confirmed COVID-19 deaths with the addition of the 11 on Wednesday, and the seven-day rolling average of added deaths increased to 7.4 from 6.0 on Tuesday.

The addition of 178 new cases of COVID-19 in the Northeast Health District pushed up the seven-day rolling average of added cases to 132.4 from 126.9 on Tuesday. 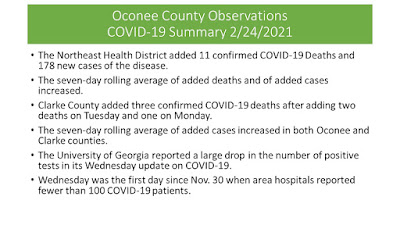 Prior to Wednesday, the seven-day rolling average of added cases has fallen eight days in a row.

The University of Georgia, in its Wednesday COVID-19 Health and Exposure Update, reported 40 positive local COVID-19 tests for the week ending Feb. 21, down from 65 a week earlier, and a total of 68 positive tests systemwide, down from 105 a week earlier.

The University also reported that the positivity rate for walk-in tests at Legion Field fell to 1.1 percent from 1.3 percent the week earlier. The number of tests declined to 1,890 from 2,255 in the previous week.

The Department of Community Health, in its Wednesday Long-Term Care Facility Report, listed two new cases of COVID-19 among residents of Silverleaf Alzheimer’s Care of Athens in Clarke County and one staff case at Madison Health and Rehabilitation in Morgan County

The Northeast Health District added 1,619 vaccinations on Wednesday, up from 1,382 on Tuesday; 306 of the added vaccinations were first doses, and 1,313 were second doses.

The total number of the second doses represents 3.8 percent of the District’s 530,630 residents.

Turnout continues to be very light in early voting for the Education Local Option Sales Tax in Oconee County, with only 55 voters casting a ballot on Wednesday, for a total of 155 ballots across the first three days the Civic Center has been open for voting. Only 26 absentee ballots have been mailed out.

Across the state, the Daily Status Report on Wednesday added 121 deaths, and the seven-day rolling average of added deaths increased to 92.0 from 85.9 on Tuesday.

Forty-four of the added deaths occurred in the last 14 days, and the seven-day rolling average of added deaths dated by occurrence increased on Wednesday from Tuesday.

The Department of Public Health reported administration of 40,749 new doses of COVID-19 vaccinations on Wednesday, up from 37.010 on Tuesday. The number of first doses was 16,276, and the number of second doses was 24,473.

As of Wednesday, 81.8 percent of the doses shipped to the state had been administered.

The data in the charts come from the Department of Public Health Daily Status Report and have been updated for the 2:54 p.m. Report on Wednesday.