The attorney for Oconee County Schools has rejected the request made by representatives of the University of Georgia School of Law First Amendment Clinic that it live stream Board of Education meetings and provide access to those meetings for individuals who wish to attend virtually.

Phillip L. Hartley, a Gainesville attorney, said that the Georgia Open Meetings Act does not require “virtual transmission” of a “live meeting” unless the Board itself is meeting virtually under emergency conditions, as it did from April through July 6 of last year.

The legal team told Hartley they were making their request on behalf of Dr. John Phillips, the parent of students in Oconee County Schools, and Kendra Kline, “a local education and disability rights advocate.”

Hartley also rejected other requests made by Hamilton and her colleagues regarding it social media policy and treatment of employees who have expressed disagreement with school officials.

Hamilton had asked Hartley to respond to the nine-page letter she had written by Feb. 22, and Hartley’s response is dated Feb. 18. 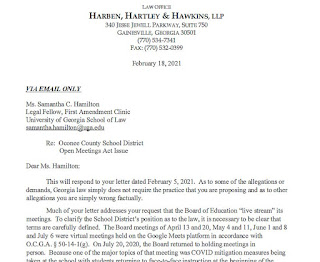 “As to some of the allegations or demands, Georgia law simply does not require the practice that you are proposing,” Hartley wrote, “and as to other allegations you are simply wrong factually.”

“The suggestion in your letter that by meeting in person and by not simultaneously streaming meetings, the Board is somehow violating the Open Meetings Act is totally lacking in legal support,” Hartley wrote.

“No person who has sought to attend a meeting of the Board has been denied the opportunity to do so,” Hartley stated.

“That there may be individuals who would prefer to stay home and view the meeting virtually does not make it a requirement,” Hartley continued. “The suggestion that these individuals have been ‘excluded’ from Board meetings is simply wrong.

“In the last year everyone has had to make individual decisions about what activities, meetings or gatherings they attend and what mitigation measures they take when they attend such events,” he wrote.

“(Y)ou contend that individuals who choose not to attend the in person Board meetings must be given an option to speak from home through some virtual set up,” Hartley wrote.

“The Board has provided various opportunities for communication with it in addition to the public comment periods,” he continued. “These include sending a comment in writing or communicating directly with the Board members or the superintendent.”

“The portion of the letter that addresses special meetings of the Board and notice of those meetings is especially difficult to follow,” Hartley wrote.

“There is nothing requiring that the minutes include a description of every presentation or discussion,” Hartley said, “and certainly no requirement that such be included in any detail.”

“(T)he individual responsible for monitoring and maintaining the District's social media sites has blocked very few posts or individuals and each time it has involved a violation of the terms of use,” Hartley said in his response to the First Amendment Clinic letter.

“The District especially objects to the statement that staff members were retaliated against as a result of conversations with the school administrators about statements on the petition that you reference,” Hartley wrote.

“Because some of the information on the petition was inaccurate, principals did contact some of the staff members that signed the petition to make sure they had accurate facts and to see what concerns existed,” he said.

“Hopefully, this letter has convinced you that the Board is in full compliance with the Open Meetings Act, even if there are areas where you wish that the Board would adopt a different policy,” Hartley said in conclusion.

All,
I have received two comments on this post that are not signed. I ask that the two who submitted the comments resubmit them with a real name attached. Or the individuals can simply send another comment taking ownership of the original, using a real name. I will then publish the comments.
Thanks.
Lee