On the one-year anniversary of the Georgia Department of Public Health reporting its first COVID-19 case in Oconee County, the county added seven cases on Saturday, and its seven-day rolling average of added cases was 11.3.

The surrounding 10-county Northeast Health District added 57 cases and two deaths in Saturday’s Department of Public Health Daily Status Report, and the seven-day rolling average of added cases dropped to 82.1 from 83.9 on Friday.

The District added two deaths attributed to the disease–in Morgan and Walton counties–and the seven-day rolling average of added deaths increased slightly, to 2.4 from 2.3 on Friday. The District now has 837 confirmed COVID-19 deaths.

The Morgan County death, the 19th in the county, was of a 63-year-old male with a chronic condition.

The Walton County death, of a 67-year-old male without a chronic condition, was the 221st in that county.

With the addition of the seven cases in Oconee County, the seven-day rolling average fell to 11.3 from 12.3 on Friday. 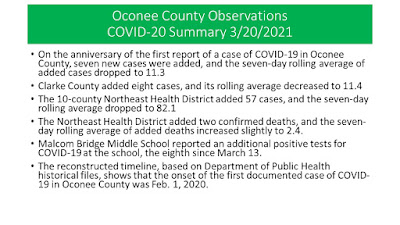 Clarke County added eight cases, and its seven-day rolling average of added cases decreased to 11.4 from 11.9 on Friday.

Malcom Bridge Middle School Principal Michael Eddy sent parents of students in that school an email at 1:30 p.m. on Saturday informing them that “an individual” in the school had tested positive for COVID-19.

Eddy had informed parents at 6:33 p.m. on Friday that “three individuals” in the school had tested positive and sent similar notes regarding four other “individuals” since March 13.

The Department of Community Health does not issue a Long-Term Care Facilities Report on the weekends.

The Northeast Health District added 3,331 new vaccinations on Saturday, up from 3,062 on Friday.

The ratio of number of vaccinations administered per person in the District is 0.21. That compares with a ratio of 0.29 in the state.

The gap between the state and the Northeast Health District increased again on Saturday, meaning the District is falling behind the state overall in administration of the vaccines.

The Department of Public Health began issuing its Daily Status Report on March 15, and the Report for March 20 listed the first COVID-19 confirmed case in Oconee County. 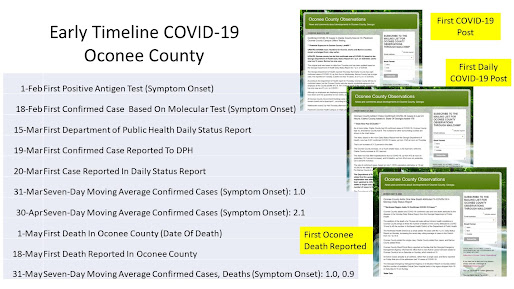 Confirmed cases then and now are based on molecular tests.

In those early days, the Daily Status Report was issued at various times during the day, and frequently more than once a day.

The actual onset of the disease for that first case has been dated by the Department of Public Health for Feb. 18.

The first case in the county, based on a rapid antigen test, was Feb. 1, according to the historical record. The date is for the onset of the disease.

The Department of Public Health only released results of antigen tests starting on Nov. 3, so that first case was not public until the record files were released late last year.

The first confirmed COVID-19 death in Oconee County was on May 1, and the first report of that death was on May 18.

I did my first post on COVID-19 on March 19, followed by posts on March 21, 23 and 24. I began posting a daily COVID-19 report for the county on March 27 and have produced a report every day since.

Across the state, the Department of Public Health added 1,864 new cases of COVID-19 on Saturday, and the seven-day rolling average of added cases increased to 1,706.3 from 1,636.9 on Friday.

The Daily Status Report added 50 confirmed COVID-19 deaths across the state on Saturday, and the seven-day rolling average of added deaths increased to 40.3 from 39.0 on Friday.

Only 15 of the added deaths occurred in the last 14 days, and the seven-day rolling average of added deaths listed by day of occurrence decreased slightly from Friday.

The Department of Public Health reported on Saturday the administration of 90,044 vaccinations, up from 88,865 on Friday.

The Department of Public Health did not report any new allocation or shipment of doses of the vaccine to the state on Saturday.