The Northeast Health District added five confirmed deaths from COVID-19 on Friday and only 77 new cases of the disease as the Department of Public Health Released its Daily Status Report.

Because the Department of Public Health eliminated four deaths in Barrow County it had previously listed as the result of COVID-19, the net addition of one death from the disease resulted in a drop in the seven-day rolling average of added deaths.

One of the new confirmed deaths was of an 86-year-old male in Oconee County without a chronic condition. The death brings to 59 the number recorded in the county since the outbreak of the pandemic.

The total number of confirmed COVID-19 deaths in Jackson County is 127 and in Walton County 215, the highest of any of the 10 counties in the District.

With the addition of the five deaths and the subtraction of the four deaths, the total number of confirmed deaths from COVID-19 in the Northeast Health district now is 819.

The District had added four deaths last Friday, but it did not subtract any deaths that day. With the net gain of one death in Friday’s Department of Public Health Report, the seven-day rolling average of added deaths dropped to 2.1 from 2.6 on Thursday.

The Oconee County death is dated as occurring on Jan. 26 and could be one of the deaths reported by St. Gabriel personal care home off Virgil Langford Road in the Jan. 26 and Jan. 27 Department of Community Health Long-Term Care Facility Reports.

It is impossible to know that with certainly from the public files, but if the death is one of those reported at St. Gabriel, it would mean that five (and, less likely seven) of the nine deaths reported by long-term care facilities in Oconee County in January had now been treated as a “confirmed” death by the Department of Public Health.

The addition of the 77 new cases of COVID-19 on Friday resulted in a drop in the seven-day rolling average of added cases to 110.4 from 112.4 on Thursday.

Oconee County Schools reported 14 Active COVID-19 Cases on Friday, down from 16 the week before, and 70 Active Quarantines Due to Close Contact, down from 122 last week.

The weekly COVID-19 Status Report does not contain any additional information about the cases or quarantines, but school principals do send messages to parents of students at the school informing them when someone at the school has tested positive for COVID-19.

Parents have forwarded to me emails they received since last Friday of six positive tests at North Oconee High School and a positive test at Malcom Bridge Middle School.

The Weekly Status Report was posted at 3:05 p.m. on Friday, and, in an email at 4:30 p.m., Michael Eddy, principal at Malcom Bridge Middle School, told parents that on Friday “we were alerted to two individuals” at the school who had tested positive for COVID-19.

Anisa Sullivan Jimenez, director of Communications for Oconee County Schools, told me in an email message this week that principals at the schools report cases to the central office in preparation for the Friday Weekly Status Report, so it is likely the 14 Cases on Friday include the two from Friday from Malcom Bridge Middle School.

Eddy had informed parents of another positive test on Tuesday.

The Department of Community Health, in its Friday Long-Term Care Facility Report, listed no new COVID-19 cases or deaths at long-term care facilities in the Northeast Health District.

Since Monday, when teachers became eligible for vaccinations, the District has administered 13,112 new vaccines, with 9,452 of those being first doses.

Oconee County added 1,630 new vaccinations since Monday, with 1,413 of those first doses.

On Monday, according to Oconee County Schools Director of Communications Jimenez, more than 750 faculty and staff from the county’s schools received the first dose of the vaccine at Piedmont Oconee Health Campus on Virgil Langford Road.

More than 50 faculty and staff 65-year-old or older already had been vaccinated, she reported.

The schools have 1,046 full-time faculty and staff.

The Daily Status Report added 49 confirmed COVID-19 deaths across the state on Friday, and the seven-day rolling average of added deaths dropped to 46.1 from 49.0 on Thursday. 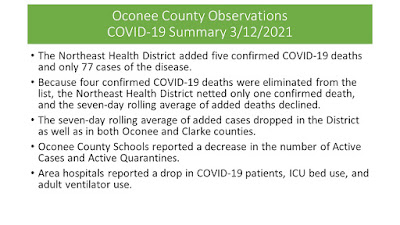 Twenty-four of the confirmed deaths occurred in the last 14 days, and the seven-day rolling average of added deaths dated by occurrence increased on Friday from Thursday.

The Department of Public Health reported that it eliminated two deaths it previously has listed as a confirmed death from COVID-19.

Since the records for Barrow County show the loss of four cases, at least two of those must have been transferred to another county.

The Department of Public Health did not add any “probable” death from COVID-19 in Friday’s Daily Status Report, and the seven-day rolling average of added “probable” deaths dropped to 6.3 from 6.4 on Thursday.

Across the state, the Department of Public Health added 1,757 new cases of COVID-19 on Friday, and the seven-day rolling average of added cases decreased to to 1,897.3 from 1,973.4 on Thursday.

The Department of Public Health reported administration of 75,085 doses of COVID-19 vaccines on Friday, up from 62,645 on Thursday.

Since Monday, when teachers were eligible to receive the vaccine, the state has administered 255,250 doses of the vaccine, with 177,521 of those first doses.

The Department of Public Health did not report any new allocations or shipments of doses of COVID-19 vaccinations on Friday.

The data in the charts come from the Department of Public Health Daily Status Report and have been updated for the 2:50 p.m. Report on Friday.