Only 1,282 voters cast a ballot in early voting, which ended Friday, or returned an absentee ballot, making it almost certain that a very small percentage of Oconee County’s 31,965 registered voters is going to decide the fate of a major educational tax referendum.

Oconee County Schools is asking citizens to approve a new Education Local Option Sales Tax–effectively continuing the one in place–and authorize issuance of general obligation bonds for up to $42,950,000 to finance construction of a list of new capital projects.

Included is a third middle school at the site of the existing Dove Creek Elementary School in the far northwest of the county, additional classrooms at three elementary schools, and a new central administrative Instructional Support Center.

Also to be funded by the new tax are renovations of the three additional elementary schools and of the system’s sole primary school, purchase of new buses, and technology projects, including devices and infrastructure upgrades.

Voting has been light throughout the three weeks of advanced in-person voting, with the daily total breaking 100 only on Wednesday and again with 216 voters on Friday. 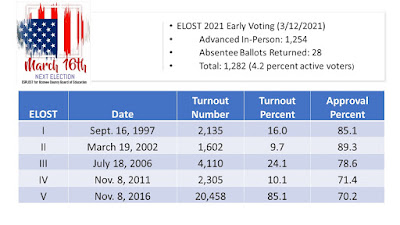 Only 39 persons have requested an absentee ballot, and 28 of those had been returned as of the end of early voting at 5 p.m. on Friday.

No obvious comparison exists for the Tuesday referendum, which is the only issue on the ballot except for voting inside the limits of Bogart, where a Council seat will be filled.

It seems unlikely that percent is going to increase a great deal.

At the request of Superintendent Jason Branch, the Board of Education agreed to put the issue on the ballot more than a year before the current ELOST expires.

The rationale offered is that interest rates are low and construction costs will only increase.

The plan is to sell bonds as soon as the referendum is approved even though revenue will not begin to be collected until the end of 2022.

The campaign, the Board was told, would be directed at faculty and staff of the schools who then could communicate to others linked to the schools in the community.

Superintendent Branch and school principals have sent email messages to parents of students in the schools outlining the projects to be funded by the sales tax revenue.

Less than 40 percent of the households in the county have students in the school, however, and there has been little communication about the referendum outside the schools.

Legally, the schools cannot advocate for the tax.

So Branch and the principals list the projects to be funded by the new tax and urge the recipients to vote.

ELOST has enjoyed extremely high levels of approval over the years.