Georgia Department of Transportation Chief Engineer Meg Pirkle has overruled the District 1 project team in favor of a full access median commercial break for a major shopping center on the Oconee Connector between SR 316 and Mars Hill Road.

In a letter dated April 6 and posted by Oconee County planning staff on the county website on Wednesday, Pirkle told land owner Maxie Price she was honoring Price’s request for maintenance of the existing median break on the Connector and for an access cut to his property.

As such, she was overturning a decision by Jason Dykes, District 1 traffic engineer, who in an email message to Oconee County on Jan. 12 said the existing median opening would be closed as part of a more than $70 million reconstruction of the SR 316 interchange with the Oconee Connector.

Boswell is District 10 member of the State Transportation Board, to which McMurry reports. Pirkle reports to McMurry.

The Planning Commission on Monday is to take up again Price’s request for a rezone of the 47 acres he wants to see developed into a shopping center with a Publix as an anchor.

In unrelated news on Wednesday, two additional candidates filed to run in the June 15 special election in Watkinsville in the final day of qualifications.

Access to the Oconee Connector and to Mars Hill Road has become the central sticking point in development of the shopping center on the 47 acres tucked between the Connector, Mars Hill Road, Virgil Langford Road, and SR 316. 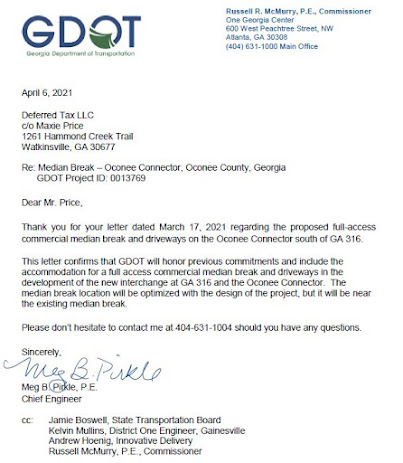 Price is asking the county to combine the properties into a single tract to be zoned B-2 (Highway Business District) for development of a shopping center with a grocery store as the main tenant and for retail, restaurant, and hotel uses.

Sembler Corporation of Florida would be the developer of the proposed shopping center with Publix as the grocery store operator.

The submitted concept plan shows the main entrance to the shopping center off the Oconee Connector about half way between SR 316 and the intersection of the Connector with Mars Hill Road and Daniells Bridge Road.

GDOT engineers denied a request by Price and Boswell for an access cut to Price’s property when the Oconee Connector was widened as part of the widening of Mars Hill Road to Butler’s Crossing.

The state did build a median break across from Price’s property to accommodate a now inactive fire station on the east side of the Connector.

The Oconee County planning staff recommended that Price be granted access to the Oconee Connector but only for right-in, right-out traffic. Dykes from GDOT had said that access was not standard but would be acceptable as a “compromise.”

The staff report specifically recommended against the full-access, signalized intersection proposed in the Sembler concept plan.

Dykes wrote in his Jan. 12 email message to Guy Herring, director of Planning and Code Enforcement for the county, that GDOT intended to close the median break as part of the multi-grade reconstruction of the SR 316 intersection with the Oconee Connector.

At the Planning Commission meeting in January, Herring cited the correspondence from Dykes to explain the GDOT position on the entrance.

The Oconee County planning staff report also recommended that the number of access points to the shopping center be reduced from five to three on Mars Hill Road.

Price, through his attorney William Berryman, sought and was granted three different delays in the final decision on the rezone and used them to obtain the April 6 letter from Pirkle. 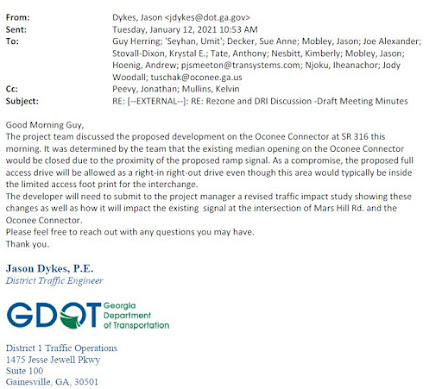 Berryman also submitted to the county a lengthy legal argument that, among other things, claimed that both the county and GDOT had made earlier commitments to Price and the previous owners of the property regarding access to the Oconee Connector.

Included was correspondence from 1997 with Wayne Shackelford, then GDOT commissioner, regarding access to the connector and a median break.

Pirkle, in the April 6 letter to Price, writes that “GDOT will honor previous commitments and include the accommodation for a full access commercial median break and driveways in the development of the new interchanges at GA 316 and the Oconee Connector.”

The break “will be optimized with the design of the project,” she wrote, “but it will be near the existing median break.”

When it granted the most recent request for a delay by Price, the Board of Commissioners decided to send the rezone request back to the Planning Commission, which had voted 8 to 0 against the request.

The Board of Commissioners is scheduled to make the final decision on May 4, following another hearing on Monday by the Planning Commission.

In the end, the Board of Commissioners has final say over the concept plan and can vote to maintain the right-in, right-out limitation regardless of how GDOT designs the highway.

Since the road will belong to county, it also can decide whether to install the requested traffic light.

Pirkle’s letter only refers to the access and median break.

The group has organized a petition with nearly 800 signatures of those opposing the development.

The Watkinsville special election on June 15 is the result of Bob Smith’s abrupt decision in March to step down as mayor.

Brodrick then announced he would run for mayor in the special election, freeing up Post 1 as well.

Brodrick and Garrett qualified on Monday.

Maultsby and Steckel qualified before the noon deadline on Wednesday. Both had run unsuccessfully for Council in November.

Steckel, 46, of 54 South Main Street, lists his occupation as attorney.