The seven-day rolling average of added COVID-19 cases increased for the third day in a row in the Northeast Health District with the addition on Wednesday of 79 new cases of the disease in the Department of Public Health Daily Status Report.

The increases in the rolling average have been small, from 48.4 on Sunday to 52.9 on Tuesday and 55.0 on Wednesday.

The District increases in cases are reflected at the state level as well, which has seen increases each day since Friday.

The Northeast Health District added only one confirmed death from COVID-19 in the Wednesday Daily Status Report, and the seven-day rolling average of added confirmed deaths dropped to 1.4 from 2.0 on Tuesday.

The death was of a 70-year-old male in Barrow County with a chronic condition. Barrow now has 128 deaths from the disease, and the District has 895.

Oconee County added seven cases in the Daily Status Report on Wednesday, and the seven-day rolling average of added cases increased to 3.6 cases per day from 3.1 on Tuesday.

Clarke County added 16 cases, and the seven-day rolling average in Clarke increased to 12.6 from 12.4 on Tuesday.

The Department of Community Health did not report any new COVID-19 cases among residents or staff of the 44 long-term care facilities in the Northeast Health District covered by the Long-Term Care Facility Report.

No new COVID-19 deaths were reported in the 44 facilities.

Jennifer Whitaker, principal at High Shoals Elementary School, sent parents of students in the school an email at 8:50 p.m. on Tuesday informing them that “an individual” in the school had tested positive for COVID-19. 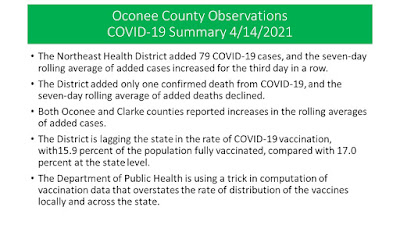 This was the first email about a positive COVID-19 test since classes began after Spring Break that parents at Oconee County Schools have forwarded to me.

The University of Georgia, in Wednesday’s COVID-19 Health and Exposure Update, reported 21 locally administered positive tests for COVID-19, down from 31 a week ago, and a total of 33 positive tests systemwide, down from 53 a week earlier.

The positivity rate for walk-in tests for those without symptoms at Legion Field remained unchanged at 1.4. The number of tests dropped from 846 a week earlier to 638 in the week ending April 11.

The Department of Public Health released data on Wednesday showing that 15.9 percent of the population of the Northeast Health District is now fully vaccinated, up from 14.8 percent on Tuesday.

The District is lagging the state as a whole by 1.1 percentage points.

Oconee County has the highest percent of its population vaccinated in the 10-county District with 23.0 percent. Clarke County is at 16.7 percent.

I calculated these percentages based on the population figures given by the Department of Public Health in the Daily Status Report, namely 41,737 for Oconee County and 129,779 for Clarke County.

The State Vaccine Distribution Dashboard reports higher percentages for the 10 counties in the Northeast Health District (it does not report the data for the District itself) and for the state because of a trick it is using to increase the rates.

I discovered the trick after several days of puzzling over and analyzing the discrepancies between my calculations and those of the state. The Department of Public Health has only recently begun reporting these data on vaccination rates.

First, although the Dashboard lists the data as for all residents on its main page, a note at the very bottom of the “About The Data” tab indicates that only residents 15 years old an older are used in the base of the calculations.

Using a smaller base increases the percentages of vaccinated individuals.

Second, the state is using data from the 2018 American Community Survey by the U.S. Census Bureau rather that the state’s own projections of population broken down by demographic classification.

In contrast, in the Daily Status Report, the state uses its own higher population projections, which has the effect of decreasing the case rate and death rate it reports each day.

These population estimates are just that, and it isn’t clear which, if any, is correct. The inconsistency in their use is what is striking.

The state’s technique lessens the severity of the disease and increases the success of the vaccination program.

Across the state, the Department of Public Health added 1,866 new cases of COVID-19 on Wednesday, and the seven-day rolling average of added cases increased to 1,572.0 from 1,536.3 on Tuesday.

The Daily Status Report added 42 confirmed COVID-19 deaths across the state on Wednesday, and the seven-day rolling average of added deaths decreased to 36.0 from 39.6 on Tuesday.

Nine of the 42 added confirmed deaths occurred in the last 14 days, and the seven-day rolling average of added deaths dated by day of occurrence increased on Wednesday from Tuesday.

The Department of Public Health eliminated three deaths it had previously confirmed as caused by COVID-19 from its archive of deaths from the disease.

The Department of Public Health on Wednesday reported data indicating that 17.0 percent of the state’s population is fully vaccinated, up from 16.5 percent on Tuesday.

The Department of Public Health Vaccine Distribution Dashboard lists the percent fully vaccinated at a rounded 18 percent, using the smaller population base as noted above.

The Centers for Disease Control and prevention uses the U.S. Census Bureau estimate of the state’s population for 2019 and lists Georgia as the state with the smallest percentage of its population fully vaccinated.