The rolling averages of both COVID-19 cases and deaths from the disease dropped for the third day running in the Northeast Health District with the release of the Daily Status Report by the Department of Public Health on Saturday.

The deaths bring to 880 the number in the District since February of last year.

The seven-day rolling average of added deaths decreased to 2.0 deaths per day on Saturday from 2.3 on Friday. The District had added four deaths on Saturday a week ago.

For Clarke County, the death was the 129th since the outbreak of the pandemic. Clarke has the lowest death rate in the District, with just more than 99 deaths per 100,000 population.

For Oglethorpe County the death was the 28th, and the death rate is nearly 184 per 100,000 population. Oglethorpe is the smallest county in the District in terms of population, while Clarke County is the largest.

With the addition of 53 new cases of COVID-19, the seven-day rolling average of added cases in the Northeast Health District fell to 57.6 cases per day from 60.3 on Friday. 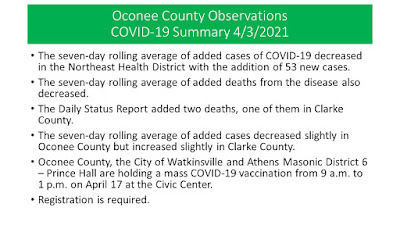 Philip Brown, principal at North Oconee High School, sent an email to parents of students at the school at 2:27 on Friday reporting that “an individual” at the school had tested positive for COVID-19.

The case most likely was included in the count of eight Active COVID-19 Cases reported by the school system on Friday afternoon. That would indicate that half of the cases reported were at North Oconee.

Oconee County Schools does not provide any detail on the “individuals” who tested positive or which school reported the cases, but some parents forward to me the messages they receive from school principals.

The vaccines are being provided by University Cancer and Blood Center of Clarke County.

Registration will be required for the event.

Beginning at 9 a.m. on April 7 Oconee County residents should visit http://www.cityofwatkinsville.com/234/Covidvaccine to register.

Those without internet access can call 706-769-5161 during business hours for assistance with registration.

The space and configuration of the Civic Center will allow approximately 50 individuals to be vaccinated and observed at 15-minute intervals, according to a news release sent out on Friday by Watkinsville Acting Mayor Brian Brodrick.

Participants will need to return on May 8 for their second dose of the Pfizer COVID-19 vaccine.

The Georgia Department of Public Health is no longer providing any data on vaccinations at the county level.

The Daily Status Report added 22 confirmed COVID-19 deaths across the state on Saturday, and the seven-day rolling average of added deaths decreased to 38.6 from 45.6 on Friday.

The District had added 71 deaths on Saturday of last week.

Nine of the added deaths occurred in the last 14 days, and the seven-day rolling average of added deaths dated by day of the death increased from Friday.

The Department of Public Health eliminated one death previously recorded as attributed to COVID-19.

Across the state, the Department of Public Health added 1,219 new cases of COVID-19 on Saturday, and the seven-day rolling average of added cases decreased to 1,448.0 from 1,491.3 on Friday. The state had added 1,522 cases last Saturday.