Two of the county’s four municipalities will have elections on November, with qualifying in Bishop, North High Shoals, and Watkinsville completed on Wednesday.

Qualifying in Bogart continues through the end of the day on Friday. As of 11 a.m. on Thursday, no one had qualified for the two open Council seats. (Update: As of 4 pm on Friday, David Kilpatrick Jenny Bridges and Greg Maddox qualified. The top two vote getters will assume the two seats, held at present by Kilpatrick and Bridges.)

In Bishop, no election will be held because only one person qualified for mayor and for each of the four Council seats.

The only change in the Bishop Council results from long-time Council member and former Mayor Nedra Johnson not seeking re-election and being replaced by Deborah Lucas.

North High Shoals will have competition between Jared Strickland and Meagan Cundiff for Post 5 on Council, now held by Violet Dawe, who is running unopposed for Mayor.

The Oconee County Office Of Elections and Registration manages the elections–including the qualifying–for Bishop, North High Shoals, and Watkinsville under intergovernmental agreements between those cities and the county. 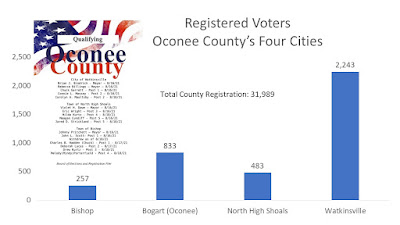 Part of Bogart is in Clarke County, and that city handles its own qualifying and elections.

The seats in Bogart now held by Jenny Bridges and David Kilpatrick are up for election, and City Clerk Diane Craft said in a telephone conversation late on Thursday morning that qualification remains open until 4 p.m. on Friday.

Only voters in the four cities get to cast a ballot for the council and mayoral races in those cities. As of Thursday, that means only 257 voters in Bishop, 833 in the Oconee County part of Bogart, 483 in North High Shoals, and 2,243 in Watkinsville.

The situation is confusing because each of the four cities is surrounded by a larger precinct with that name. (In Watkinsville, the precinct name is City Hall). The lack of correspondence between city boundaries and postal addresses adds even more confusion.

Voters in the four cities combined make up only 11.9 percent of the county’s 31,989 registered voters.

All voters, and any others who register by Oct. 4, will be eligible to vote in the countywide referendum on Nov. 2 on a new 1 percent Transportation Special Purpose Local Option Sales Tax.

In her qualifying materials Billings, 40, 149 VFW Drive, lists her occupation as self-employed. She has lived in Oconee County for 35 years and in Watkinsville for five years.

Brodrick, 46, 117 South Main Street, lists his occupation as marketing. He has lived in Oconee County for 18 years and in Watkinsville for 18 years.

Massey, 71, 2 Second Street, lists her occupation as retired. She has lived in Oconee County for 35 years and in Watkinsville for 35 years.

Maultsby, 56, 1050 Taylors Drive, lists her occupation as bookkeeper. She has lived in Oconee County for 24 years and in Watkinsville for 24 years.

Massey and Maultsby are seeking Post 2 on Council, and Chuck Garrett, incumbent Post 1 Council Member, will be on the ballot unopposed.

Maultsby lost to Garrett in a special election on June 15 to fill the Post 1 spot vacated by Brodrick.

Brodrick ran for mayor in that same special election, necessitated by the surprise resignation of Mayor Bob Smith. Peter Steckel’s name also was on ballot, but Steckel had moved out of the city after qualifying and had withdrawn from the race.

Maultsby also lost in a race in 2020 against Jeff Campbell for Post 5 on the Council.

Garrett, 64, 25 South Street, lists his occupation as sales manager. He has lived in Oconee County for 64 years and in Watkinsville for three years.

Dawe filed for Mayor to finish out the term of Toby Bradberry, who passed away on July 11.

Violet Dawe, 78, 300 Shadyfield Lane, lists her occupation as retired biologist and farmer. She has lived in Oconee County for 40 years and North High Shoals for 40 years.

Ann Evans did not file for re-election for Post 3, and Eric Wright, 45, 119 Jefferson Road, is running unopposed for the spot.

Hilda Kurtz, 56,1140 Arborwood Ridge, lists her occupation as professor. She has lived in Oconee County and North High Shoals for 13 years. She qualified for Post 4, which she currently holds.

Strickland, 22, 1061 Arborwood Ridge, seeking to fill Dawe’s Post 5 term, lists his occupation as student and IT professional/business owner. He has lived in Oconee County for eight years and in North High Shoals for eight years.

Cundiff, 36, 349 Jefferson Road, also seeking Post 5, lists her occupation as paramedic. She has lived in Oconee County for four years and in North High Shoals for four years.

John Scott, 80, 1011 Old Bishop Road, had filed for Post 1 on the Bishop Council on Monday, but he withdrew on Wednesday. Scott's withdrawal made an election unnecessary because all of the seats are uncontested.

Lucas, 56, 1968 Townside Lake Court, who filed for the Post 2 previously held by former Mayor Johnson, listed her occupation as pastor. She has lived in Oconee County for eight years and in Bishop for eight years.

Incumbent Post 4 Council Member Melody (Mindy) Porterfield, 48, 1880 Townside Lake Court, is a research scientist who has lived in Oconee County and Bishop for 11 years, according to the qualifying documents.

Incumbent Mayor Johnny Pritchett, 71, lists his occupation as retired. He has lived in Oconee County for 71 years and in Bishop for 24 years.