Oconee County Schools added 10 new COVID-19 cases from Friday until noon on Monday, according to data released on Wednesday in response to an open records request filed by parents.

According to the records released on Wednesday, the schools now have recorded 66 cases of the disease since the beginning of the school year on Aug. 4.

Nine of the 10 cases added on Sunday and through just before noon on Monday were of students.

Oconee County Schools initially said it was only going to inform parents of students in a classroom where a positive case had been recorded and not provide any additional information on cases in the schools.

Crowe and John Phillips, who also has children in the school system, released the data given them by Oconee County Schools, also on Aug. 12.

Oconee County Schools changed its policy on Friday (Aug. 13) and issued a very brief report on the number of active cases. It also began informing parents of all students in a school when a case at a school had been recorded.

That report on Friday indicated the schools had 48 active cases of COVID-19, the largest number ever reported by Oconee County Schools going back to the beginning of last school year.

The system ended the school year with no active cases.

It is difficult to know with certainty from the data released whether the incidence of the disease has increased since last week.

The released data show the schools recording 12 cases on Monday of last week, 10 on Wednesday, 12 on Thursday and eight on Friday.

No cases had been recorded on Sunday of last week (Aug. 7), but the 10 on Sunday of this week (Aug 14) and the four by 11:04 a.m. on Monday suggests a likely high count for the beginning of the week.

The recording procedures used by Oconee County Schools in the past showed cases stricken through and marked as inactive once the individual had been cleared to return to the classroom.

The file released on Wednesday, however, has 36 cases stricken through that have return-to-school dates of later than Sunday, meaning they should remain active.

The schools actually had 51 active cases by the end of the day on Friday, using that procedure.

Using that same way of counting active cases, the schools had 57 active cases at the end of the day on Sunday.

The released file lists 13 cases for which the individual could return to classes on Monday, reducing that number to 44, but another four active cases were added by 11:04 a.m. on Monday, putting the count back up to 48.

Crowe and Phillips are part of a Facebook Group called Safety First.

Phillips released the data to me, and I did my own analysis of those data.

Additional analysis of the data by the parents is on the group's Facebook page.

The map below is from that page and is used with the group's permission. 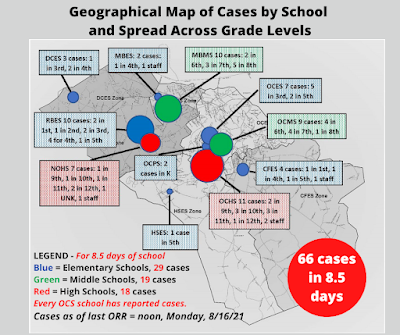