Turnout in early voting makes it likely that a relatively small number of Oconee County voters will have cast a ballot in the party primary runoffs by the end of election day tomorrow.

When early voting ended on Friday, only 2,244 of Oconee County’s 29,155 active voters had cast a ballot.

Another 282 voters had turned in an absentee ballot, bringing to 2,526 the total number of ballots received by the end of the day on Friday, or 8.6 percent of the county’s active voters.

At the end of early voting before the May 24 election day, 5,005 persons had cast a ballot in early voting, and 347 had returned an absentee ballot, for a total of 5,352 votes cast. That is 18.4 percent of the active registered voters.

The result is that only a relatively small number of Oconee County voters is likely to determine the Republican Party nominee for Post 3 on the Oconee County Board of Education.

Of the 2,244 votes cast in early voting in Oconee County, 2,079 were with the Republican ballot, and only 165 were with the Democratic ballot.

The contest between Ryan Hammock and Julie Mauck for the Republican Party nomination for Post 3 is the only local race on either ballot, and the turnout in early voting shows the interest in that race.

Only 0.2 percent of voters used the nonpartisan ballot.

So far in early voting, 92.6 percent of the voting has been with the Republican ballot.

Georgia does not have registration by party, and it also has open primaries.

Voters must use the same party ballot in the runoff as they used in the primary.

The polling stations at the county’s eight precincts will be open from 7 a.m. to 7 p.m. tomorrow. 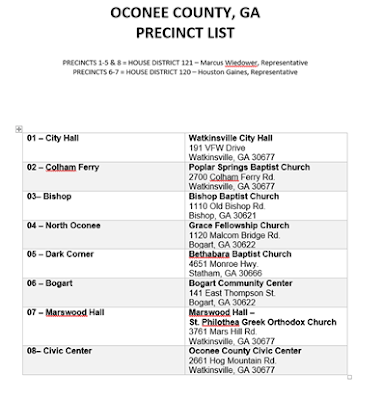 The Republican-controlled General Assembly rewrote the state’s voting laws in 2021, shortening the time between the primary and the runoff, cutting the number of days of early voting, and shortening the time for requesting and returning absentee ballots.

Early voting stretched across 17 days, including two Saturdays, prior to the May 24 election, but only five days, without a Saturday, prior to the June 21 runoff.

This is the first election under these new regulations, and it is difficult to project what final turnout figures will be at the end of the day tomorrow.

The best guess, however, would be a turnout rate about half of that on May 24.

Hammock, a banker, and Mauck, a realtor, took sometimes similar and sometimes different positions in responses to 16 different questions I posed to them before early voting in the runoff began.

They differed most in terms of what they said they would bring to the Board if elected.

Melissa Eagling has qualified to run against the winner of that race in November, but she has not yet submitted the 1,425 petitions required to get her name on the ballot as an Independent.

On the Democratic side, Tabitha Johnson-Green, a nurse from Washington County, and Jessica Fore, a worship leader and realtor from Athens, are seeking the party nomination in U.S. Congressional District 10.

Fore, but not Johnson-Green, appeared at an Oconee County Democratic forum last week.

Raphael Baker and Janice Laws Robinson are the Insurance Commissioner candidates, and William Boddie Jr., and Nicole Horn are the candidates for Labor Commissioner.