Charping had just told the Board that collections from the system’s one percent Education Local Option Sales were down slightly in calendar year 2019 compared with the year earlier.

As of the end of January, Charping reported, the school system had $2,843,088 in its ELOST account, meaning it will have no difficulty making the upcoming payment this year.

“I don’t see any real concern on your face,” Board Member Tim Burgess said to Charping at the end of her report.

“Not at this time,” Charping said with a smile and laugh.

Charping presented the Board with the January ELOST distribution, which is for taxes collected in December.

That figure was down 5.5 percent from a year earlier.

October and November collections also were down. October was down 14.96 percent from a year earlier.

Going back to January of 2019, only four months had distributions higher than a year earlier.

Charping’s report also showed that across the first two years of the five-year ELOST, the school system had collected $15,576,797 against the projected maximum revenue of $45 million from the tax.

Response Of Board Members

In her report to the Board, Charping summarized the ELOST collections by saying “The rolling average is slightly below the previous year by .11 percent.”

“I read somewhere where someone described ELOST collection as flat. How do you describe them?” Board Chair Tom Odom asked in response.

“This year is what?” Odom said.

“Just to follow up on that point, because I was kind of looking at it the same way, ” Board Member Burgess said. “I think one of the things we’ve forgotten is how much ‘18 grew above ‘17.

“So yes, it seems to have flattened out,” Burgess said, “but percentages can mislead you because they’re a reduction on a huge increase when we started this.

“So, for both SPLOST years we’ve had,” Burgess said, “we’ve collected a million or almost a million dollars more in both years than we had when we started at the end of the last SPLOST before.

“We’re still two and a half million dollars in the black after having paid all of the debt service for calendar year ‘20,” Burgess said.

Following additional questions on other ELOST expenditures, Burgess said “I don’t see any real concern on your face.”

“Not at this time,” Charping responded.

Charping only presented ELOST returns in her report going back through December of 2018. Earlier reports included additional data.

Following the meeting on Feb. 10, I downloaded the ELOST returns for Oconee County from the Georgia Department of Revenue for the last three years to be able to show the trends Charping and Burgess were discussing.

Twice a year–in May and November–the Georgia Department of Revenue allocates smaller amounts of revenue on a pro rata basis. These are revenue that are not identifiable by jurisdiction and are allocated proportionately to jurisdictions collecting the respective taxes.

I did not include the pro rata distributions in the chart, as they distort income for those months, but I did include them in the totals by year shown in the green box in the chart.

The general pattern in the chart is clear. (Click on the chart to enlarge it.) 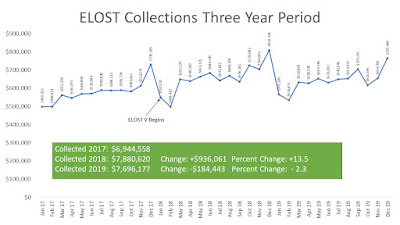 Calendar year 2018–the first year of the current ELOST–was a growth year over 2017, which was the final year of the previous ELOST.

Collections in 2019 are up from those in 2017, but revenues in the last calendar year are stagnant at best, or even slightly declining.

Charping used other calculations in her presentation and comments to the Board, but the change figures shown in the chart above are the simplest and most straightforward.

All three are showing the same pattern as shown in the chart above.

At the beginning of the meeting on Feb. 10, the Board of Education recognized staff, students and faculty.

The Board recognized the February Pursuit of Excellence Award Winner/School Nutrition, Terri Whitehead.

The video below is of the Feb. 10 meeting of the Oconee County Board of Education.

Recognitions begin at 1:45 in the video.

Chief Financial Officer Charping began her presentation to the Board at 27:57 in the video.

Thanks for all of the extra reporting you do, Mr. Becker!